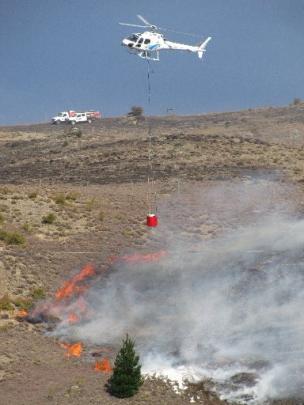 A helicopter crew douses flames on the Bannockburn side of Cornish Point yesterday. 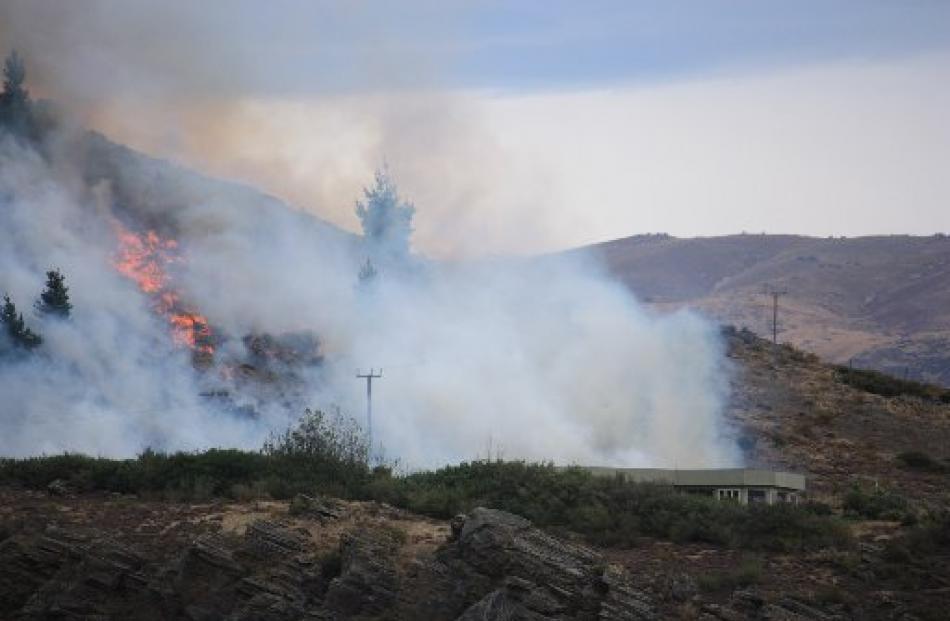 Wind carries the flames away from a Cornish Point house. Photos by Sarah Marquet and Leith Huffadine.

The Cromwell Volunteer Fire Brigade was first on the scene, around 2.30pm, followed by the Department of Conservation (Doc), which called in two Queenstown-based helicopters carrying 800-litre to-1000 litre monsoon buckets.

Doc Alexandra field base conservation services manager Mike Tubbs said it was ''very windy and very steep'' and the second helicopter was called in ''to get quick control''.

The fire was burning on both sides of the point - heading up the Cromwell gorge on one side and towards Bannockburn on the other.

Mr Tubbs said it appeared the fire was started by a tractor mower, though that had not been confirmed, and there were no concerns for property.

Dick Coker, who lives on Cornish Point, said he had been mowing grass and the fire was accidental, but declined to comment further until he had spoken to the authorities.

Mr Tubbs said 14 of his staff helped battle the fire at its peak and one or two would remain overnight in case it flared up.

More would return in the morning to make sure everything was properly extinguished.

He said there was ''fairly light fuel'' on the hill, ''largely thyme and grasses, some briar ... there were some pines trees involved, too''.

The fire appeared to have damaged a cellphone tower.

A Gen-I spokesman said one of the towers in the area might have been ''degraded'' but it seemed to be an issue with mains power.

An Omakau volunteer fire crew had to call for reinforcements from Alexandra yesterday afternoon to help battle a fire on about 100m of road verge, which spread into old tree stumps.

Omakau chief fire officer Sam Leask said a strong northwest wind fanned the fire, which started from a spark from a chainsaw.

Fire crews from Omakau, Alexandra and a rural fire team from Blackstone spent about an hour and a-half at White Rd, northwest of Omakau.

''We had lots of fire appliances but were desperate for staff, so were glad to see the Alexandra crew arrive,'' Mr Leask said. Water was ferried from Omakau to fight the fire.