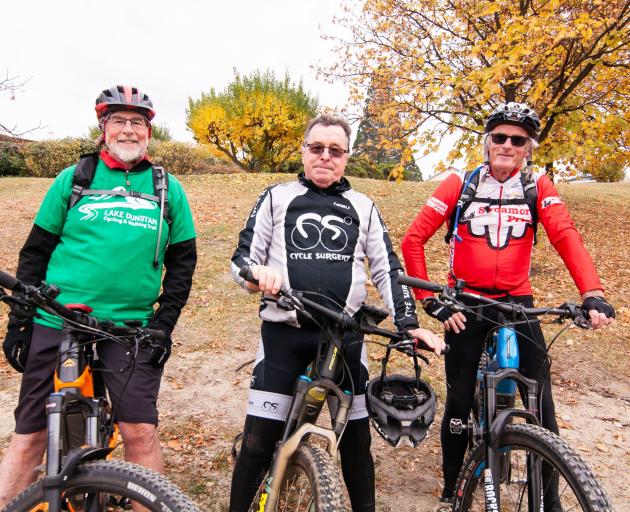 The first three riders to officially complete the Lake Dunstan Cycle and Walking Trail on Saturday at the finish line are (from left) Murray Kennedy, who was second across the line, Brian Thomson and Alan Bell, who were first and third respectively. PHOTO: SHANNON THOMSON
Brian Thomson was first across the finish line and led the cyclists singing the praises of New Zealand’s newest cycle trail at its opening on Saturday.

The public opening of the Lake Dunstan Cycle and Walking Trail was not a race but the 68-year-old Clyde man was basking in a sense personal victory.

He was first to officially complete the Clyde to Cromwell leg of the long-awaited trail less than two hours after pedalling off from Clyde.

"Wait until I get a few drinks in me, then it will be the World Cup," he boasted.

Mr Thomson, a lifelong cyclist, said it was the "best track I’ve ever ridden — and I’ve ridden a few".

He described the track as "challenging" with sharp turns and downhills that occasionally stripped him of leading the pack.

His feat was assisted by an e-bike.

"E-bikes are the greatest thing invented," he said.

Close behind Mr Thomson was another keen cyclist Murray Kennedy (68), of Pisa Moorings, who was in the pack of 20 official riders, 10 selected by ballot and 10 individuals who had a direct hand in the trail’s construction, to be able to start the trail first.

The trail was great and was by far the best among among the Central Otago network of Great Rides in terms of the conditions on the trail itself and the variety of scenery, Mr Kennedy said.

Third to complete the trail was Alan Bell (71), of Cromwell, who had managed to pass Mr Thomson on bends and down hills before surrendering the lead back to him.

The first to cross the line on pedal power alone was Rangi Wharepapa, of Dunedin.

Earlier, up to 300 cyclists, plus runners and walkers, gathered in Lodge Lane in Clyde before 10am. Waitaki MP Jacqui Dean cut the ribbon and sent off the first pack of official riders.

Speaking before the ceremony, Mrs Dean followed the lead of dignitaries at the VIP opening on Friday and heaped praise on landowners who had granted land easements, as well as pointing out to the crowd she was no longer MP for Clyde due to electorate boundary changes.

It will be ‘one day — one way’ with riders moving from Clyde to Cromwell, due to anticipated numbers.

The Lake Dunstan Cycle and Walking trail construction began in May 2019, building 58km from Smiths Way, through Cromwell and near to Bannockburn, around Cornish Point, along Lake Dunstan before finishing in Clyde.

The total cost of constructing the trail was $7million, funded due to a tripartite agreement between Central Government, the Central Lakes Trust and Otago Community Trust.