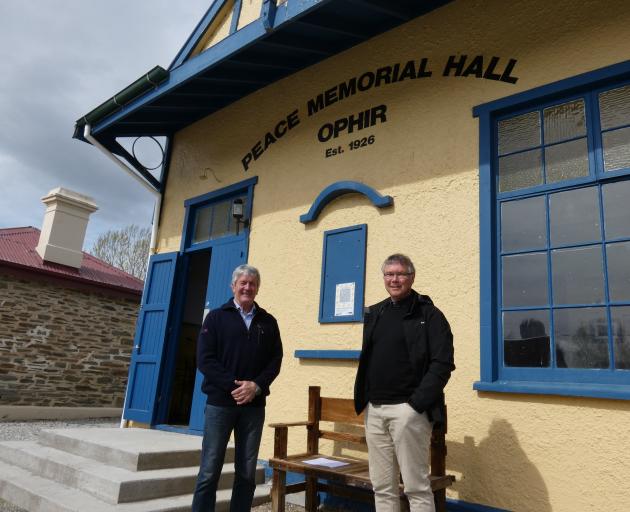 Agriculture Minister Damien O’Connor (left) and Environment Minister David Parker after announcing funding to preserve and protect the Manuherikia River Catchment at the Ophir Hall yesterday. PHOTO: JARED MORGAN
The Manuherikia River has been given a funding boost so the catchment can be cleaned up and the river’s future ensured.

At a meeting in the historic Ophir Hall yesterday, Environment Minister David Parker and Agriculture Minister Damien O’Connor were keen to point out the Manuherikia Catchment Exemplar Project was less a Government intervention and more an example of funding being targeted towards those that knew the catchment best.

The Manuherikia catchment is the third exemplar catchment to be targeted as part of the Government’s plan to clean up waterways by supporting community-led programmes.

While the exact figure earmarked for the Manuherikia has not been disclosed, it has been included in the Government’s At-Risk Catchments Project and, as part of the essential freshwater work programme, the overall project has funding of $12 million over four years.

Mr Parker told the meeting he had a fondness for Central Otago and the Manuherikia catchment was vitally important to the region’s people.

"This is about everyone coming together to stop the degradation and undo the damage of the past.

"The Manuherikia rises in the Hawkdun ranges and flows through some of New Zealand’s most stunning landscapes that inspired the paintings of Grahame Sydney and the poems of Brian Turner."

The river was under pressure, with water quality declining and over-allocation of water reducing the minimum flow needed for ecological processes, such as providing habitat for wildlife, and for recreational use, he said.

The Manuherikia joins two other exemplar catchments that have already been announced, Kaipara Moana and Te Hoiere/Pelorus.

Two initial projects would provide a starting point for the work and the first included a 15km riparian planting, fencing and wetland restoration project in Thomson’s Creek and an assessment of the fish passage and barriers for native galaxiids.

The second project would improve the knowledge of the mahinga kai (food resources) and biodiversity values in the catchment to support further restoration work that will use complementary innovative and traditional technologies.