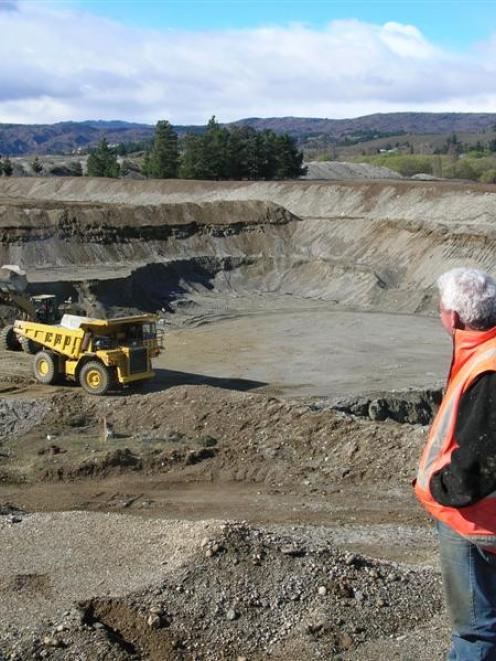 Earnscleugh gold mine manager Mark Coleman oversees excavation of the site - where more than 32,000cu m of earth has been moved and made into bunding - near the Fraser River yesterday. Photo by Rosie Manins.
Gold deposits at Earnscleugh are just weeks away from being taken out of the ground by L and M Mining, which plans to extract more than 110,000 ounces of the precious metal.

Physical work started on the site in June, and while mining has been taking place, gravels have yet to be processed for gold.

Mine manager Mark Coleman, of Cromwell, said more than 32,000cu m of earth had been excavated from the site and made into bunding around the area.

He estimated about 10,000cu m would be further excavated in the next week.

Grass seed will be sown on the bunds when they are finished.

Mr Coleman said once excavation of the mine was complete, workers would "dig the wash out" to set up a mine plant.

Gravels would start to be processed for gold in about six weeks, he said.

So far, seven staff, including Mr Coleman, have been working on the site.

Employment numbers are expected to increase as the project intensifies.

L and M exploration manager David Manhire, of Christchurch, said the company was waiting to see what Earns-cleugh's gravel had in store.

"Once we start processing gravel for gold, that's where it gets either overwhelmingly exciting or tremendously depressing," he said.

All monitoring equipment has been installed throughout Earnscleugh and data is being collected.

Mr Manhire said dust and noise as well as water level and quality were being monitored in and around the mining site.

Ground water from neighbouring bores owned by residents was also being closely monitored for any disruption caused by the project.

Opponents of the mine were concerned about the impact of dust on orchards and vineyards in the area.

L and M has permits and consents to mine at Earnscleugh for the duration of its seven-year, multimillion-dollar project.

The site is just a short distance from dredge tailings left by gold-mining operations a century ago.

Water, rather than chemicals, will be used to extract gold from gravel, in a similar fashion to mining at Island Block near Ettrick a few years ago.