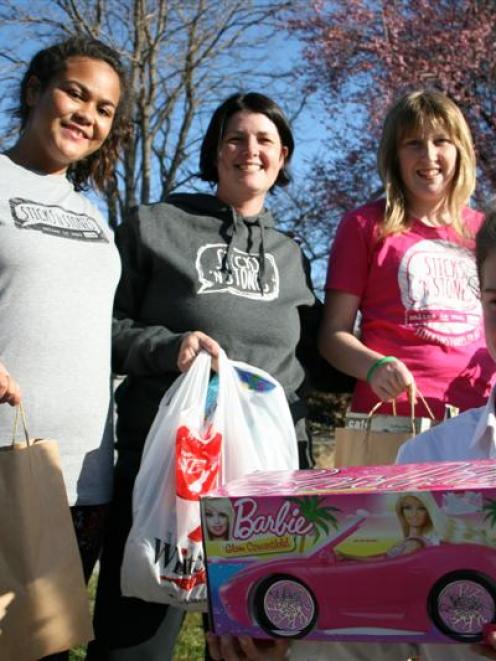 Project facilitator Karla Sanders is flanked by Sticks 'n Stones members (left) Vanya Rouse Henry (13) and (right) Erica Morris (12), both of Alexandra Primary School, with (front) Abby Hecht Wendt (13), of Dunstan High School, holding some of the Random Acts of Kindness prize packs. Photo by Liam Cavanagh.
There are going to be some lucky Alexandra residents and visitors next Tuesday.

Members from Dunstan High School and Alexandra Primary will be on the streets handing out cupcakes as well as vouchers for lunches, coffee and mystery prize packs. Businesses including the Courthouse cafe, Paper Plus and Subway would also be giving away vouchers.

Sticks 'n Stones project facilitator Karla Sanders said its members wanted to get behind the day while also sending an anti bullying message.

''Communities that engage positively by supporting each other do not tolerate bullying,'' she said. Most people would be chosen randomly, but some had been nominated, including five pupils from Dunstan High.

Tokens would be taped to the bottom of chairs at Dunstan High and Alexandra Primary for students to claim prizes, and free lunches would be given out at the high school canteen.

The group was also organising activity packs to be sent to the children's ward at Dunedin Hospital, an idea brought up by a member who had an aunt who worked on the ward.

''Every random act will include a card that encourages people to pass it on by doing something nice, thoughtful or positive for someone else,'' she said. People who had mystery prize pack vouchers could collect their prizes at the Alexandra Community House between 3.30pm and 6pm.

• The Cromwell Rotary Club is also seeking to restart its Random Acts of Kindness Project. Rotary Club public relations director Chantal McCarthy said it was calling the public to nominate someone who might need some help. To make a nomination, please call Chantal McCarthy on (029) 279-1680.