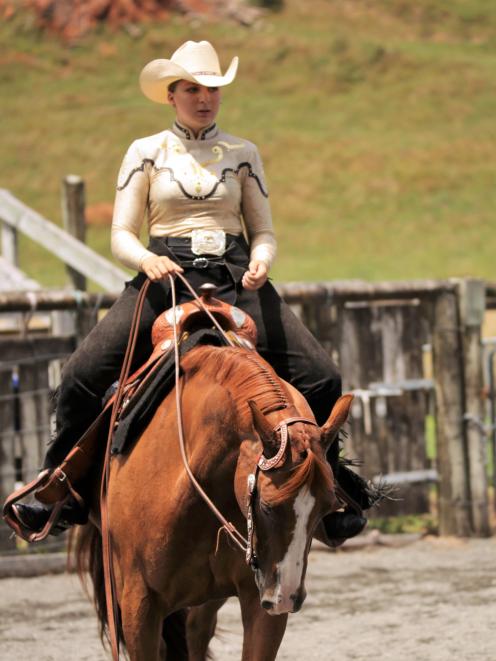 Amanda Voice contemplates her next move at the Gold Coast Western Riding Club near Waikanae on the Kapiti Coast last weekend as a trip to Texas looms. Photo: One True Colour.
Ranfurly girl Amanda Voice says she feels lucky to be named in a team to represent New Zealand in Texas for western performance horse riding.

Amanda (15) will travel to the Texas city of College Station to compete in the American Quarter Horse Youth World Cup from June 28 to July 8.

She won two golds, a silver and a bronze medal in Queensland.

Amanda had to compete in numerous selection camps to make the Texas team.

The last selection camp was a week ago, in Palmerston North, where a trainer from United States came to watch the team and interview the candidates.

For the Texas trip, there were 10 spaces in New Zealand but only nine applied.

There were five spaces in the riding team, one reserve and four for a leadership development programme.

Amanda was very pleased to be named in the riding team, which she said was a prestigious honour.

''I want to see how well I can put myself up to the challenge. It would be amazing to be placed, let alone win.''

Amanda is the only rider from Otago, and one of two from the South Island to go to Texas.

She is the youngest person in the riding team. To qualify for the Youth Cup, riders must be between 14 and 18.

Amanda said quarter horses are so named because of their ability to outpace other horse breeds in races of a quarter mile or less.