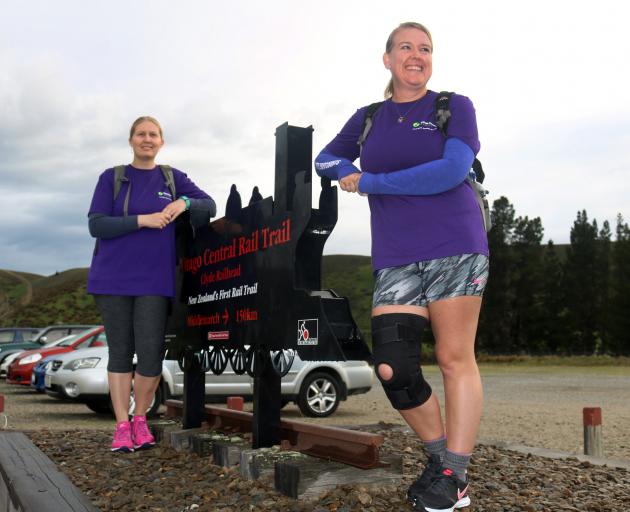 Friends Fiona Laing and Natalie Savigny, of Dunedin, are  taking on the challenge of walking the entire 152km for a good cause.

Seven months ago, Mrs Laing came up with an idea — walking the Rail Trail to raise money for Bowel Cancer New Zealand.

"One night I was just thinking, ‘Oh that would be a good idea’, and I messaged Nat the next morning  ... she said ‘Yep, sounds good’," Mrs Laing said.

"Then, the next week, we were on the radio and we were like ‘I think we’re committed now.'"

The Rail Trail was  chosen mainly because Central Otago was a significant place for Lisa.

"Lisa passed away up here but she’s from Dunedin so we thought it would be fitting to walk the Rail Trail and head home," Mrs Laing said.

The pair began on Saturday and planned to walk the trail in seven days but had next Saturday and Sunday up their sleeves if they decided to take it slower.

They were raising money for Bowel Cancer New Zealand via crowdfunding website Everyday Hero and had raised more than their $4000 target before they began the walk.

They knew the walk would not be easy but were ready for the challenge.

"For Lisa and for anyone that’s going through any type of cancer, it’s not an easy struggle so why not make it hard on ourselves," Mrs Savigny said.

"It’s a good thing that we’re raising awareness about [the cancer] especially since it’s a very treatable cancer."

Last year, the National Bowel Screening Programme began and will be in place nationwide by 2020.

Bowel screening will be offered free of charge to men and women aged 60 to 74 every two years.