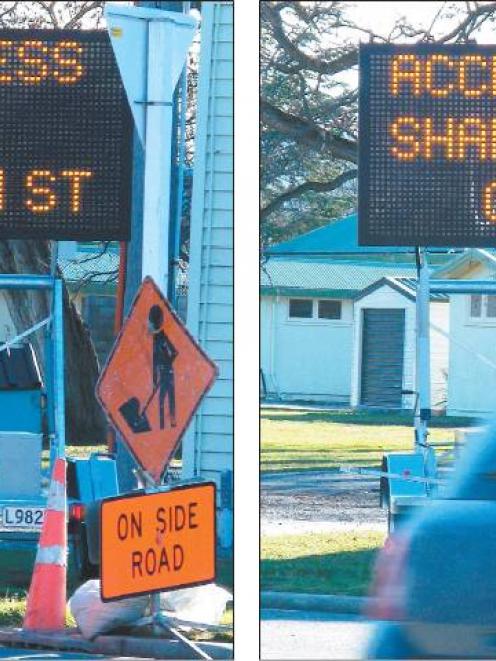 Getting the message: The new electronic traffic sign bought by Central Otago District Council in use in Alexandra this week.
NEW road markings and a portable electronic traffic sign are just some of the new road safety tools being used in Central Otago.
Directional arrows have recently been painted on State Highway 8 near rest areas at Cromwell, to remind overseas motorists to keep left on New Zealand roads.

Transit Otago Southland regional network manager Murray Clarke said the sets of arrows, painted in the centre of the roadway to indicate which direction traffic should be travelling, had been used in other tourist areas.

The $22,000 electronic sign at the intersection of Kelman and Dunorling St displayed two messages. One stated that access to a street was blocked and the other message gave the alternative access to the street.

Central Otago District Council roading manager Julie Muir said the council had bought the multi-purpose sign with road safety funding. A 61 per cent subsidy was available through the Land Transport Safety Authority.
‘‘We can use it in all types of situations - for traffic management, when there are events on or when there's road works, like in this case,'' Ms Muir said.
The sign could also be used to give reports on road conditions, like the electronic signs on State Highways.

‘‘If there's a report of fog or a particularly icy patch, then we can use this to warn about it - to say, ‘slow down, icy conditions'.''
Based on a trailer, the sign could be moved to wherever it was needed, she said.
‘‘It can also be used to record speed and shifted to any spot where speeding motorists have become a issue.''

Ms Muir said the sign could also be used for holiday weekends.
‘‘Then it might remind motorists to take a break if they're getting tired.''
She expected it to ‘‘come into its own'' during major events held in and around the town, like Alexandra Blossom Festival or sporting fixtures.

‘‘For example, it might warn motorists to expect cyclists on the road if there's a race ahead.''
The directional arrows on the state highway at Cromwell was part of a continuing programme, Mr Clarke said.

‘‘Our intention is to have them in all tourist areas of Central Otago,'' Mr Clarke said.
‘‘You'll find them particularly around rest areas and even by fruit stalls. The pairs of arrows are painted a short distance either side of entrances or exits to such areas and are aimed as a reminder to motorists, especially overseas drivers, to keep left.''

‘‘The general idea is to have them near rest areas, for example, and then repeat them up the road a bit further, before a blind bend, so people don't drive against [opposite the direction of] the arrows.''
The markings were already in several places on the highway at Queenstown, as well as near Hawea and many sets were painted on the Milford Rd.

‘‘The general call we're getting from police is that the arrows are effective and we need more of them on the roads,'' he said.