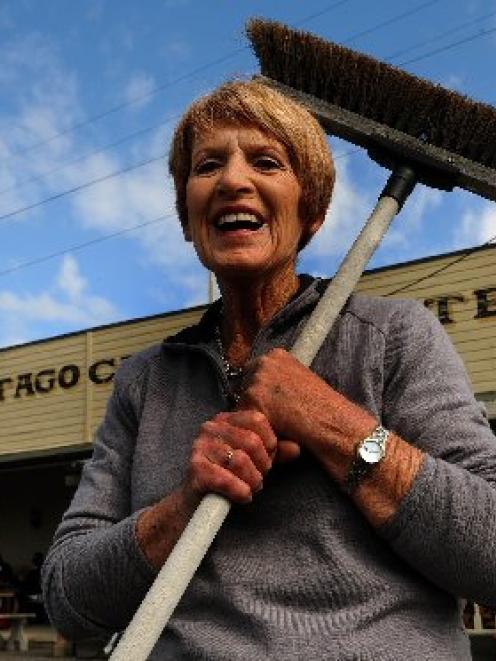 "I'm getting too old. Maybe it's time for a new challenge. I think you basically get to this time of life and need to start to smell the roses," she said.

The 68-year-old bought the Otago Central Hotel in 2003, moving in to the "rat-infested and fit-for-the-bulldozer" building in 2004.

"I moved from the palace [her former home in Mosgiel] to the pit."

She spent the following year renovating it, creating what is now a 16-bed hotel and bustling cafe frequented by Otago Central Rail Trailers.

"I averaged three hours sleep a night for the first three years," she said.

In 2008, she bought the former Hyde school and transformed the "rough and unkempt" property into a function centre, popular for wedding parties and conferences.

Along with a treated water supply which furnished "most of the town", the property package included her home.

"The possums lived in it before me. I've been living like the pauper."

However, she took the time to spruce it up recently, in between serving the community as an organist, marriage celebrant and medical first responder, and working as everything from "gardener to gofer".

Mrs Sutherland estimated she had spent more than $2 million on her businesses, which employed 14 people.

"It's a lot of money, but [whether] I get it back will remain to be seen."

She had been thinking about selling for several months and the properties, for sale as a group or individually, had received a "little bit of interest" since going on the market two weeks ago.

However, she had "no idea" if she would move, or what she would do in the future.

"I've got a lot of heart here. I'll probably cry the day I leave. This is home, this is my spot. I like it up here, but can you sit back if someone takes it over?

"It's time for new blood.

"I think it's the type of business that's a family-run business - it's pretty labour intensive."

When asked if she was proud of her achievements, she gave a hesitant "yes" before calling herself a "perfectionist" and lavishing praise on those who helped her along the way.

"I don't do Hyde by myself. I've had terrific support from people here.

"I could never have achieved what I've done in Hyde without the support from the locals."