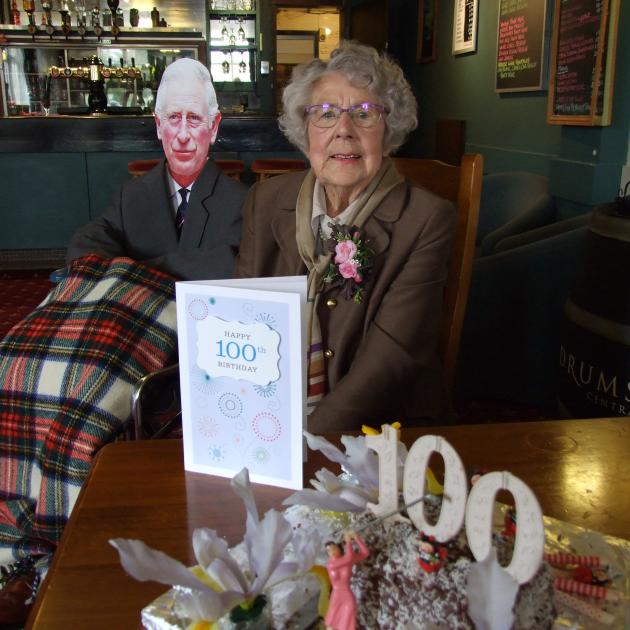 Bessie Pearson and Prince Charles share a birthday, although 32 years separate them. Photo by Lynda van Kempen.
She renewed her driver's licence last week, notched up several birthday celebrations in a few days, lives independently and cooks three meals - and pudding- every day.

Not bad going for someone who has just turned 100.

Ranfurly resident Bessie Pearson is believed to be the Maniototo's oldest. She looks several decades younger than her age and is pleased to report her friends ''don't treat me like an old girl''.

The mother-of-five shares her birthday with Prince Charles, who turned 68 yesterday, and always said maybe he would make it to one of her birthday parties. He made it to yesterday's, compliments of her friends, and delivered a birthday card from the Queen.

A cardboard cutout of His Royal Highness graced Mrs Pearson's birthday lunch with her friends at the Ranfurly Hotel. In honour of the occasion, the friends wore hats and pearls and Mrs Pearson was piped into the venue by a bagpiper.

The dozen or so friends have been meeting in the same hotel, at the same table, for their respective birthdays for more than 30 years and Mrs Pearson joined them once she retired to Ranfurly 19 years ago.

''I'm pleased you're all here to share this day with me and I think I'm the first of the group to celebrate 100 years,'' she told them yesterday.

Considering it was her sixth birthday celebration in as many days, she showed no signs of flagging.

Mrs Pearson has led an active life and she and late husband Scott raised four daughters and a son while farming at Kyeburn.

''I was married at 22 and then we lived at Kyeburn in what I guess you'd call primitive conditions, compared with today. No power, no running water, no nearby neighbours and raising a young family, '' she said.

She took up golf at 50, once scored a hole-in-one, was a founding member of the Maniototo Garden Club, is a life member of Maniototo Plunket and was a keen bowler.

Mrs Pearson has a simple explanation for her longevity.

''When I was little, I had an autograph book and and an old lady wrote in it: 'Be a good girl, lead a good life, choose a good husband and make a good wife.' I've tried to live by that.''

''Good plain food'' was another key element in her good health, with home-grown vegetables, a roast on Sundays and home cooked meals ''including a pudding every day''.

She lives independently, with help from family, neighbours and friends, but likes to do as much as she can around the house and garden.

Mrs Pearson was born in Naseby and remembers her early years at school clearly, including her first teacher.

She also recalls her elation the first time she was top of the class, aged about 7. ''Soldier'' was the word she managed to spell correctly.

Her friends all describe her as a treasure.