Pick and choose your strategy 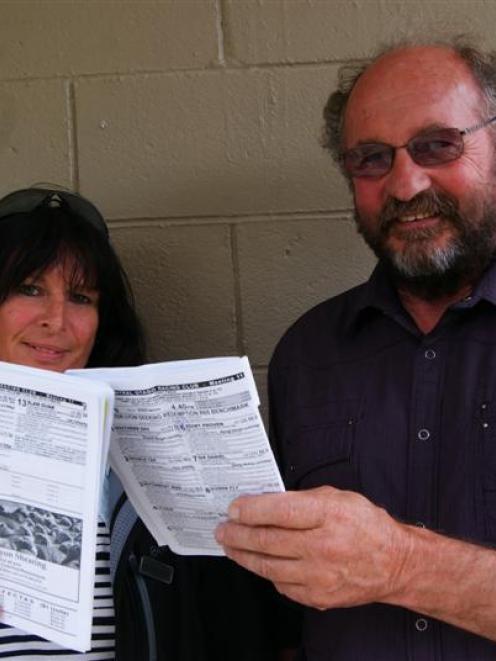 There are many factors to consider but there are never any certainties, one seasoned punter said at the Central Otago Racing Club meet in Omakau yesterday.

While he declined to be named, he said he had been attending the races for 40 to 50 years and had learned a few things in that time.

His top tip was to read the racebook.

The horse's form, the jockey, and whether the horse can handle the track were all factors that came into play on race day, he said.

''And the book normally carries that information ... so people should read the book.''

They were tasked with placing the bets for the Punters Club, a club specifically for novice punters who would rather place their money in the hands of experts.

All it took for yesterday's 132 participants to join the club was $10, meaning Mrs White and Mr Ferguson had $1320 to bet with.

For each race, they chose five horses and placed a $60 ''box bet'', meaning the horses could come in in any order.

Mr Ferguson said he was looking for the horses that were improving.

''If you just take the favourites, they are generally at the end of their run.''

Mrs White, though, was sticking to the book.

''I look at what form they've had on a dead track 'cause that's what our track is at the mo.''

At one race day several years ago, Mr Ferguson's picks returned $34 to each participant, although returns were generally between $7 and $12.

Other people did not get bogged down in the technicalities. Choosing a horse for its name was common among those spoken to by the Otago Daily Times, and some people looked for their lucky or favourite numbers or chose horses trained locally.

More than $70,000 went through the tills as some of the 2500-strong crowd placed bets throughout the afternoon.

The racing action continues in Central Otago tomorrow with the Roxburgh trots.