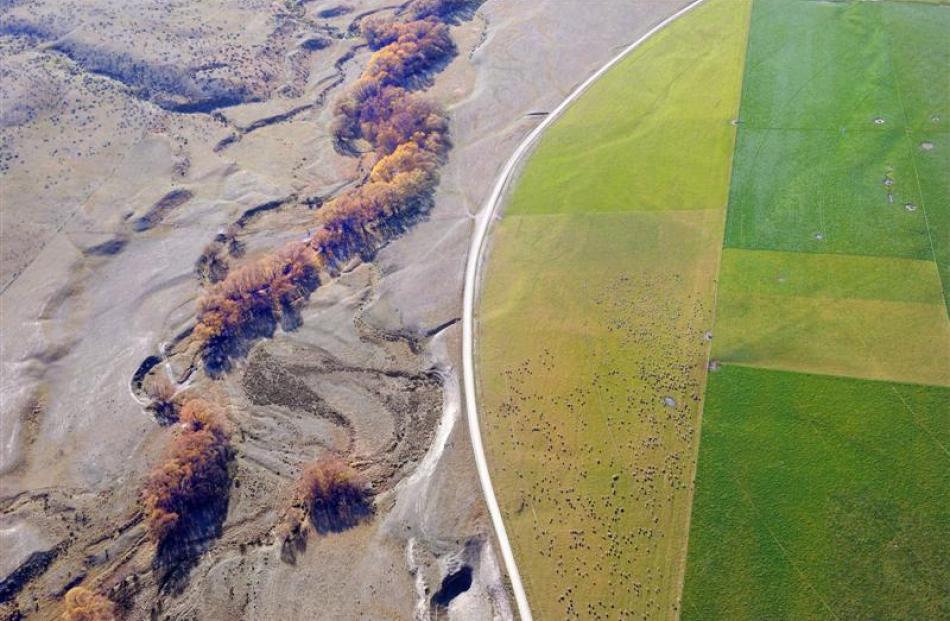 A dramatic illustration of how water can transform Central Otago farmland. This photo of irrigated land in the Lindis Valley was taken in 2010. Photo by Stephen Jaquiery. 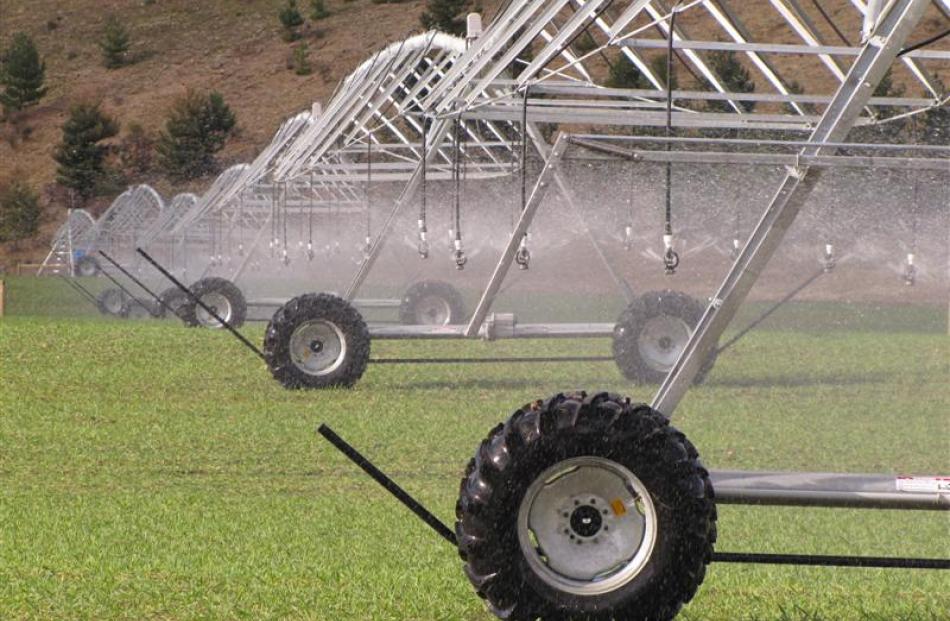 Many more central pivots like these are bound to follow once Clutha River water is flowing through the proposed Tarras Community Water Scheme. Photo by Mark Price.

Dozens of centre-pivot irrigation machines installed in the past couple of years are turning the dry plains of Central Otago into lush meadows. But, as Mark Price reports, this is just the beginning.

One farm on the flat near Tarras installed four irrigation pivots over the summer.

Another, on terraces above Tarras, installed eight or nine.

And, when the Tarras water scheme goes ahead there will be room for another 80 to 90 in that area alone.

In the world of irrigation, pivots are the state-of-the-art way of growing crops to feed dairy cows.

The spindly metal devices pump water from beneath the ground and send it along pipes, supported by metal trusses, to sprinkler heads.

And the whole thing moves slowly in a circle or half circle.

Central pivots were devised in the United States Midwest after World War 2 for growing corn, and the dairy boom brought them to New Zealand in large numbers.

Cromwell-based Wayne Bell, of WaterForce, is one of the central figures in the pivot business.

He was born in Omakau, the son of a builder, and got started with irrigation 34 years ago - mostly setting up overhead frost-fighting systems in orchards.

Then came the dramatic expansion of the Central Otago viticulture industry and its need for frost-fighting.

Now, with four partners, 12 branches and about 130 staff across the country, Mr Bell and Waterforce can claim a good [though confidential] portion of the 200-300 pivot installations in New Zealand last year.

Waterforce's first Otago pivot was at Patearoa eight years ago. In the past season in Central and North Otago alone, it has installed 19.

Mr Bell says farmers who have relied on flood irrigation are finding pivots attractive because of their precise delivery of water - not too little so plants are stunted; not too much so water is wasted.

In Central Otago, pivots are generally delivering 35-40mm of ''rainfall'' per week.

Mr Bell says ideally the plants are getting an amount of water equal to the amount they are losing to the atmosphere.

''That's what we are trying to maintain - that equilibrium where the plant has got enough water to grow.''

The amount of water available to each pivot is set through the resource consent process by the Otago Regional Council, which Mr Bell says requires farmers to prove it will be used efficiently.

''They will not give you more water than is efficiently able to be spread on that land.''

Pivots cost somewhere between $320 and $420 per metre but once in operation require little labour.

They do suck up the electricity - $50 a day for pumping, provided water is handy, and about $12 a day to drive the wheels.

But Mr Bell says farmers around Hawea Flat and Tarras are just beginning to realise they are in an extremely good location for growing winter feed crops - to feed cows trucked in from Southland.

''It's extra good land for wintering.''

However farmers, he says, have to change their farming methods.

''They can't put this irrigation in and then just think they can continue as they were.

''They have to change their farming practices to match the investment and recoup money from their investment, because it's going to be a huge investment for them.''

Mr Bell says one of the limiting factors in the expansion of pivots in other parts of the country has been the lack of adequate power supply and he believes the same issue applies at Tarras.

''I would assume Aurora, who are a major supplier to this area, are working hard to upgrade the power into some of those areas. Because they know it's coming.''

The proposed new water scheme would pump water from the Clutha River and distribute this water on demand by underground pipe, to approximately 6000ha, as well as provide water for domestic, firefighting and light industrial purposes. Existing takes off the Lindis River would be reduced, improving the environmental flow for that river.

• The longest pivot in New Zealand is more than 1200m but their efficiency drops off over 1000m.

• They have been known to climb over vans, quad bikes, utes and fence posts and it is estimated that, if it could maintain traction, a pivot wheel could walk up a vertical wall.

• Also, the tracks the wheels create can be an attractive, warm place for lambs to sleep in and it is not unknown for them to be run over.