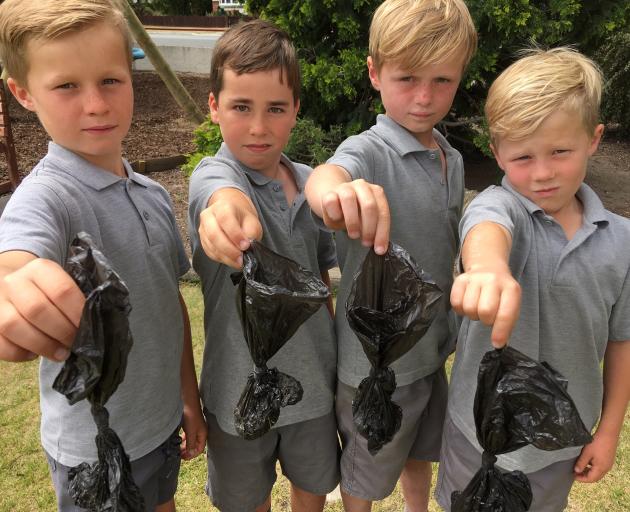 St Gerard’s School pupils (from left) Arn Cuthbertson, Freddie Ryan, George Donaldson and Quinn Breen display some of the 45 bags of dog poo they retrieved from under a tree while picking up rubbish off the rail trail yesterday. Photo: Alexia Johnston
A serial dog poo dumper appears to be up to their old tricks after 45 bags of faeces were found stashed under a tree on the Otago Central Rail Trail yesterday morning.

The small black bags were discovered by St Gerard’s School children, who were picking up rubbish to commemorate 150 years of the Catholic Diocese of Dunedin.

Quinn Breen (7) made the ‘‘disgusting’’ find under a conifer tree, at the end of Short St.

His friends Freddie Ryan (8), George Donaldson (8) and Arn Cuthbertson (8) helped him clear the area, a process which has got them thinking about right from wrong.

‘‘You need to recycle, otherwise it’s going to kill the trees,’’ Freddie said.

Quinn agreed and said it was more environmentally friendly to put the dog poo directly under the tree to decompose, without putting it in a plastic bag.

The school had a surveillance camera set up in August after bags of dog poo were dumped in the corner of the school playground over the previous year.

Teacher Anne Earland, who was with the boys when they discovered the latest stash, said the problem had stopped happening on the school grounds, but she was disappointed to know it was still occurring elsewhere.

‘‘It’s so sad really and it’s not responsible dog ownership.’’

She said it was upsetting to know the culprit had made the effort to pick up after their dog, but disposed of it in a way that had become another person’s problem.

In this case, those people were young children and they had a message for those responsible — ‘‘don’t litter’’, George said.

He said it was ‘‘really disappointing’’ to know someone was not behaving responsibly.

‘‘It’s not hard to pick up after your dog, and take the bag of poop home with you to dispose of. This behaviour is irresponsible and plain lazy.’’

Why the focus on the dog poo, when there was obviously plenty of other litter on the Trail if they were there cleaning it up? ALL littering is unacceptable.

Tutaekuri is potentially disease carrying. Dog owners can be 'entitled' in attitudes.