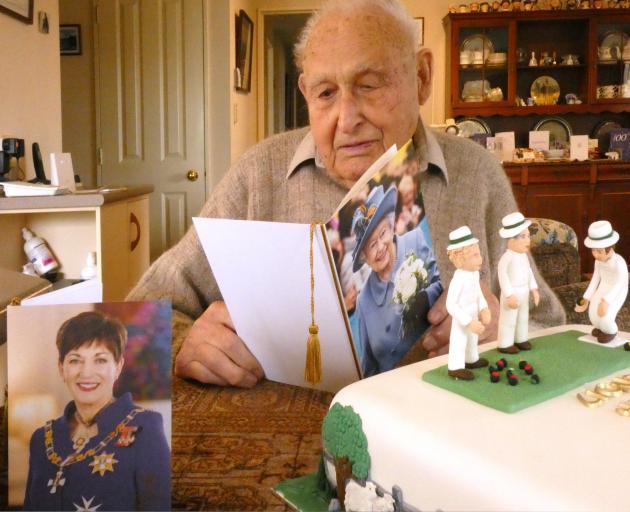 The Queen has sent her best wishes to Mr Woods, of Alexandra, who turns 100 today.

Her card, among many others, arrived just in time for his big day, despite a delay to worldwide postal services amid Covid-19.

Mr Woods puts his longevity down to "good luck and good health".

"I was just born lucky, I suppose, and I lived an active life."

Born in England, he served in World War 2 for the British Navy, landing in France on D-Day.

After the war he travelled to New Zealand where he met his late wife, Tui, at church.

They later went on to have three daughters, Nicola, Jillian and Robin.

The family ran a sheep and beef farm in Te Anau after Mr Woods successfully secured land through a ballot, retiring to Alexandra in the mid-1980s.

Mr Woods supported the community, including helping form the Alexandra Probus Club, of which he is now a life member.

He was also a member of the Clyde Bowling Club, hence his cake (above), the Manuherikia Lodge and Anglican Church on Shannon St.

Mr Woods, who still lives at home, has seven grandchildren, will celebrate his milestone among friends and family at his Alexandra home today.