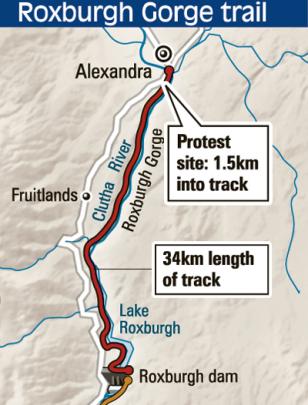 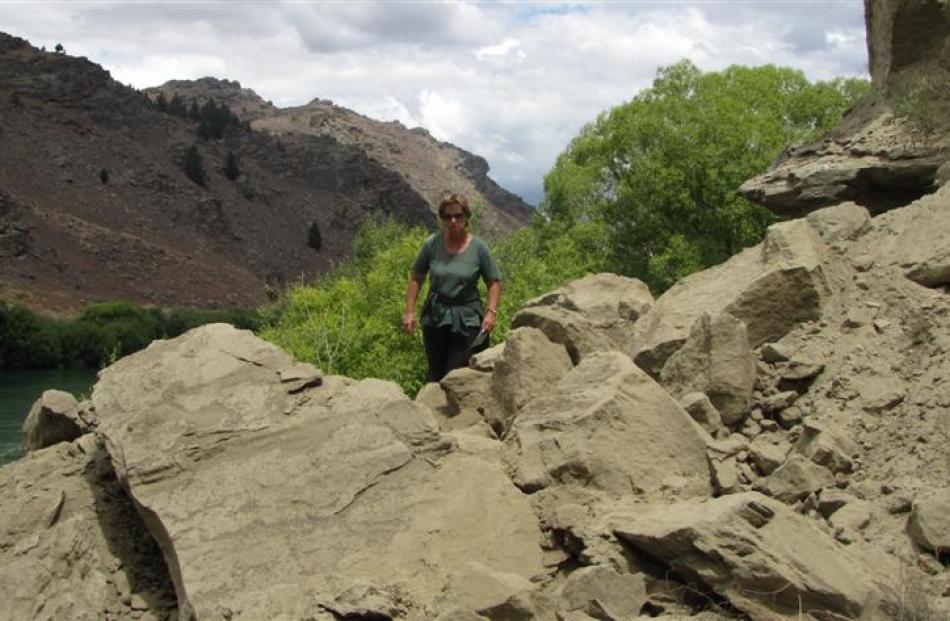 Leigh Johnston climbs the slip she says very nearly crushed her and has "undermined" their land in the Roxburgh Gorge. Not all of the material in the photograph fell yesterday, but it is unclear how much. Photos by Sarah Marquet. 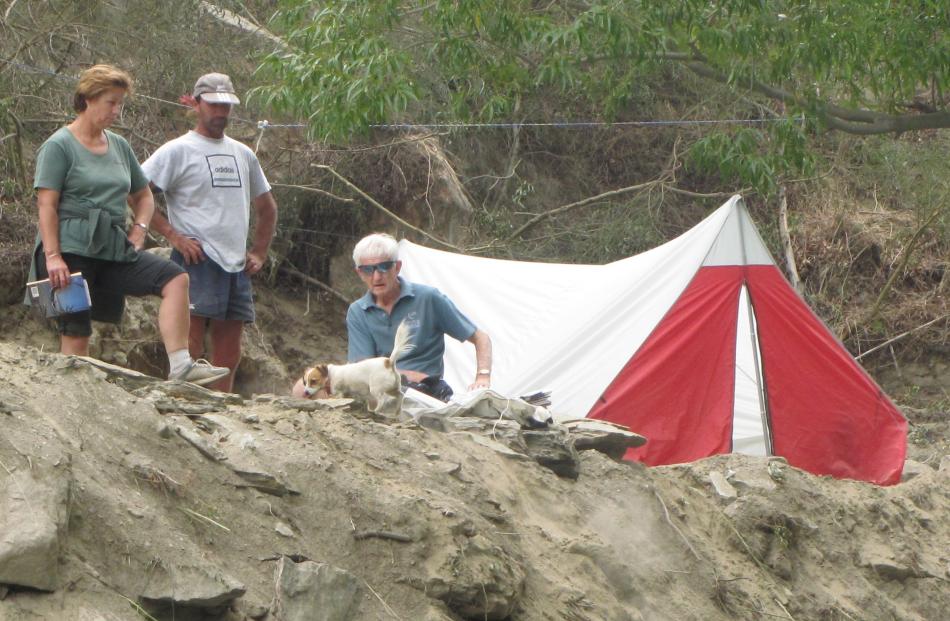 Leigh Johnston (left), Malcolm McGregor and Allan Johnston with dog Tammy at "camp" in the Roxburgh Gorge, in front of the Johnstons' land where the cycle trail is being built.

Opposition to placement of the Roxburgh Gorge cycle trail flared yesterday when a protest camp was set up across the route.

The camp, in the form of a lone tent, is about 1.5km from the Alexandra end of the gorge.

Yesterday, too, one of the protesters reported almost being crushed by falling rock.

Bruce and Leigh Johnston, who own the land above that particular section of the cycle trail, put up the small tent at 6.30am yesterday, being joined later by Malcolm McGregor, another land owner along the the trail, and Mr Johnston's father, Allan.

About 1pm Mrs Johnston went to the river to get more drinking water and, as she crossed a section where blasting had occurred the day before, rock and dirt slipped, including some from her property.

"If I had stood there, and looked at it, and screamed, I would have been flattened," she said.

Her husband Bruce Johnston was standing on the other side from where the land fell and said he thought she was a "goner".

"It shows the fickle nature of the ground that they [cycle trail contractors] are going through ... it confirmed my worst fears about the stability of the land," he said.

John Sutton Contracting had been blasting the day before to clear rock. The Johnstons said they realised that night the blasting had "undermined" their land. That was the catalyst for them to set up camp in the path of trail construction.

In November last year, the Johnstons' lawyer, Russell Checketts, approached the Otago Daily Times with concerns including the excavation of land bordering his clients' property.

At that time, he said all land in private ownership had a "right of support", meaning it had the right to be supported by land next to and under it.

Also at that time, project manager Tim Dennis said he believed the trail could be safely built across that section of land.

Mrs Johnston said they had asked the trust to supply a plan showing how it would build the trail around their land but received only a reply, via Mr Checketts, saying the trust and contractors believed it could be done.

She said they planned to remain on site with their tent until their questions were answered by the cycle trail trust.

A meeting is scheduled between the two parties for this morning.

Mr Dennis said although the protesters were on a construction site, it was also public land.

It would, therefore, be up to Land Information New Zealand to decide what action would be taken, if any.

He said the camp yesterday was not hampering construction because contractors were working closer to Alexandra, but it was "naturally disappointing that things have got to that stage".

He said there were signs at the beginning of the trail to advise people it was a construction site. If people were to enter the construction area, they should notify the contractor.

Mrs Johnston said she had notified the contractor of their whereabouts yesterday morning.

The Johnstons had, in turn, been told when blasting would occur. They had also been supplied with a radio for contact.

The Johnstons have set up a website, "Save the Roxburgh Gorge".

The tale of a trail

• 34km cycle trail along highway side of the Clutha River, through Roxburgh Gorge from Alexandra to Roxburgh Dam.

• $3.4 million budgeted for the trail, $2 million from the Government to be used by middle of this year. The trust intends to apply to community funders for the rest.

• Construction on first 10km, from Alexandra to Flat Top Hill, began in November. Expected to be completed by June.

• Trust still negotiating with some land owners, but hoped construction will soon begin on 10km from Roxburgh Dam back towards Alexandra.

• Middle section still contentious. The Miller family, farming The Herrons Station, refuse to allow access over their land. Some of the marginal strip is under water as it was not reinstated when Roxburgh Dam was built and flooded the gorge. The trust intends to transport cyclists by boat past this section.