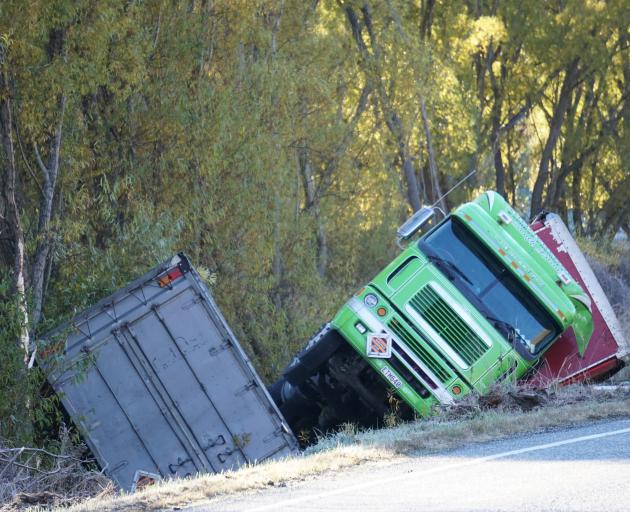 A Summerland freight truck in a ditch after it crashed at the bottom of Cluden Hill in the Lindis Pass yesterday morning. PHOTO: SEAN NUGENT
Police have confirmed this morning the commercial vehicle safety team is investigating a crash involving a Summerland Express Freight truck.

The crash in Central Otago yesterday was the sixth involving Summerland Express Freight truck in less than 18 months.

Late yesterday afternoon police were unable to confirm NZ Transport Agency advice the investigation was under way, but this morning they confirmed the commercial vehicle safety team are investigating the circumstances of the crash.

In yesterday’s crash, the B-train truck carrying dangerous goods ran off the road on the Lindis Pass.

The male driver had moderate injuries and was taken to Dunstan Hospital in a St John ambulance.

A police spokesman said the truck rolled at 5.20am near a sweeping left-hand bend at the bottom of the Cluden Hill.

Summerland trucks have been involved in six crashes on southern roads since December 2017.

Yesterday’s was the second on the Lindis Pass in three months.

Another truck carrying dangerous goods ran off the road in January early in the morning about 2km north of the Timburn Rd turnoff.

In two of the crashes, investigations found the truck drivers had fallen asleep at the wheel.

Last month, the Otago Daily Times reported a Summerland driver had quit his job because he believed he was being overworked and feared he would cause a crash.

NZTA South Island road compliance manager Kelvin Lloyd said yesterday police were "investigating the circumstances" of yesterday’s crash, and the agency would not be involved in the investigation.

However, he confirmed NZTA was investigating prior allegations of work-time breaches involving Summerland.

"The investigation will be thorough and it is not appropriate to comment on the specifics while this is under way," he said.

A WorkSafe spokeswoman said yesterday afternoon it had not been notified.