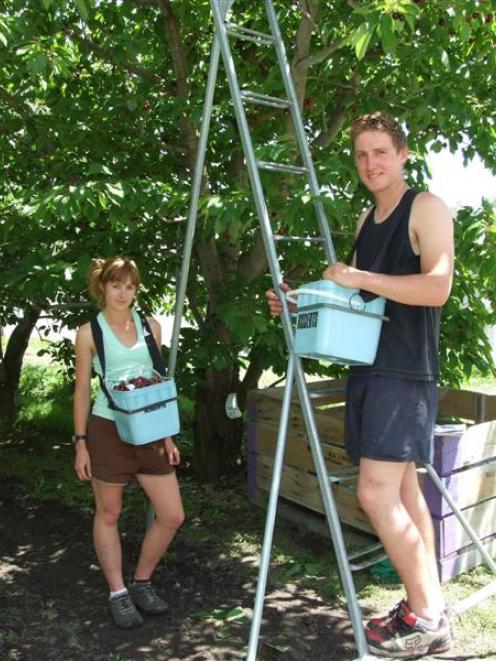 Spending their summer holidays picking cherries to earn money for their studies are Monica King and Jeff Wilson, both from Dunedin. Photo by Diane Brown.
One of the main seasonal employment agencies in Central Otago believes there are signs that students are showing more interest this year in fruit picking.

Basil Goodman, of Alexandra-based Seasonal Solutions, said yesterday that students in recent years had "moved away" from fruit picking.

However, while he had no statistics, he believed this year there was the "first indication" that student numbers might increase.

Employers operated a "Kiwi first" policy when looking for staff, but with 2000 cherry pickers required in the next two weeks, Mr Goodman considered there were plenty of opportunities for seasonal workers.

The number of vacancies in the September quarter was down 20% on last year and was likely to be down a similar percentage in the December quarter.

Ms McConnon said SJS was urging its 72,000 registered student customers to be flexible in their approach to finding a summer job.

She believed the message was getting through and students were now looking at jobs that were not considered desirable in previous years: "Students are more open to seasonal job options."

Because retailers and the hospitality industry were quieter than last year, employers were holding off from taking on staff until the last minute, and required students for shorter durations.

Mr Wilson, a Dunedin man, has picked fruit seasonally for the past five years, to help pay for his studies and to keep him in "petrol heaven" with his motor bike.

Ms King picked up the idea of fruit picking three years ago. Now, with cash to buy fabric, she is studying fashion design at Otago Polytechnic in Dunedin.

The pair said they worked long hours, more than nine at a stretch, depending on the weather and how dark it was in the morning.

"You can't pick in the dark, as you can't see the colours," Mr Wilson said.

They both worked on contract for Harry Roberts, at Earnscleugh, getting paid $5 a bucket.

"The harder you work, the more money you earn," Mr Wilson said.

While working they stayed in their holiday house in Alexandra.

The work was tiring, but the weather and being able to work outside was great, and they enjoyed meeting and talking to the foreign workers, Ms King said.

They worked until the end of February, then returning to Dunedin to resume their studies.