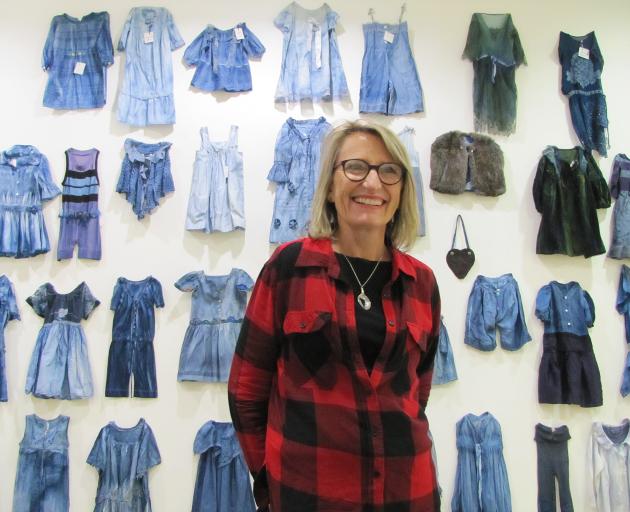 A bittersweet exhibition with both a political and personal message honours the history of "women’s work" and a sad family story."Ninety" features 90 textile works handstitched and dyed by Luggate artist Victoria Stevens — one for every year her mother lived without a mother.

"Ninety" was  homage to the loss she had suffered — the 90 garments representing the kinds of clothes a 3-year-old of her era would have worn: party dresses, church dresses, dresses that would be worn to weddings and funerals, Stevens said.

But the exhibition was "multi-layered", also honouring the "women’s work" that received so little recognition at the time and even now, the skill and nobility of creating and recycling clothes out of old garments, the mending of those that had become worn.

"The works are confronting and are a complex vehicle for the expression of emotion, beauty and the value of women’s work. What value can be placed on a mother’s love?"

Stevens, who completed her  degree at the Dunedin School of Art last year and exhibited "Ninety" in Dunedin during her final year of study, said she viewed the garments she created as canvases, and "little stories in themselves".

The blue featured in the garments in "Ninety" came to her in a moment of frustration, but ended up having multiple meanings, Stevens said.

Examining the initially largely white and pink garments she had created, Stevens was frustrated about what to do next and then spied some Japanese black dye she had "that turned everything blue".

In a "fit of frustration"’ she dipped all the garments in, leaving them to dry in trees, and have rain fall upon them.

"It opened a million doors", Stevens said, realising the blue then came to represent the "blueing" that women used to do with domestic laundry to make it appear new and fresh.

Stevens realised blue also represented sadness and melancholy to others.

Stevens has used a variety of techniques for the garments in "Ninety", including Shibori, immersion and hand dyeing, solar printing, applique, and various stitch and embroidery methods.

The idea for the exhibition came to Stevens during conversations she had with her mother near the end of her life, contemplating the loss of not having a mother for 90 years.

Joan Stevens did not get to see the resulting exhibition, but "I think she would be proud", Stevens said.