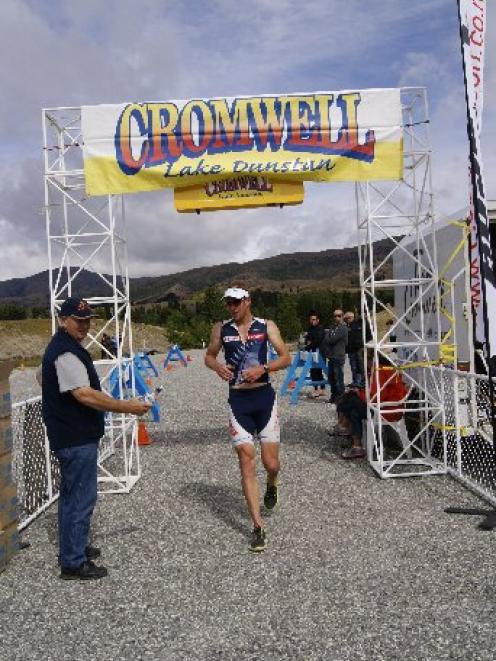 Wanaka athlete Dougal Allan won the Lake Dunstan Triathlon yesterday, using it as a warm up for Challenge Wanaka later this month. Photo by Sarah Marquet.
Wanaka athlete Dougal Allan may have been using the Lake Dunstan Triathlon and Duathlon as a warm-up for Challenge Wanaka later this month, but that did not mean he was going to take it easy.

The 28-year-old multisporter said triathlons were a new challenge for him and he found yesterday's one hard.

''You're always on the go ... always pushing yourself into the red zone, going hard all the time.''

He also competed in the Lake Hayes Triathlon recently ''to learn what it's all about'' before tackling Challenge Wanaka in the pro category.

Speaking after the race yesterday, he said he was happy with his time of 53min 20sec as ''I don't know much about the sport. I expected it to take an hour''.

The 300m swim leg, though short, was ''pretty awful'' but ''mentally, it was quite nice to get my weakest discipline out of the way first''.

Dunedin athlete and women's section winner Tamsyn Hayes (28) was also using the race as a warm-up for Challenge Wanaka in which she will also be racing in the pro category.

Despite it being ''really windy'' it was a good, safe course yesterday, she said.

The race was popular with holiday-makers and many of the 47 triathletes, 11 multisporters, 19 duathletes and 14 teams came from outside the district.

This was the 13th year of the event, which is part of the Cromwell Summer Series, organised by the Cromwell and Districts Promotions Group.

The group's next event is the National Cherry Spitting Contest and Cherry Festival, to be held in the Cromwell Mall tomorrow.