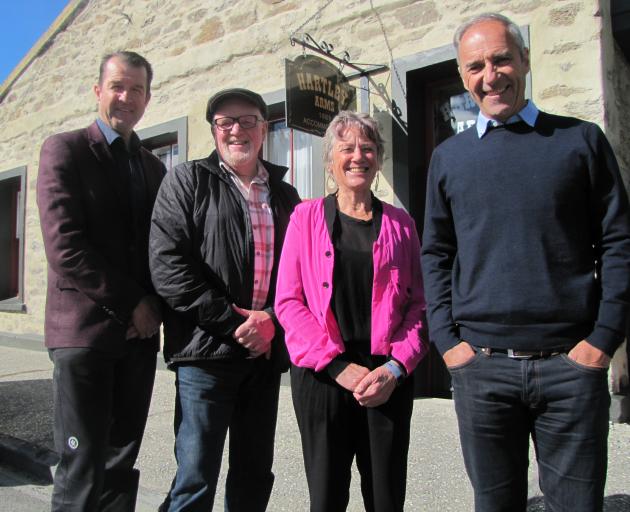 Long-serving Central Lakes Trust trustees (from left) Greg Wilkinson, Malcolm Macpherson, Bernie Lepper and Alex Huffadine reflect on the upcoming new era for the trust. All four are mandated to retire at this election. PHOTO: PAM JONES
Significant change is on the cards for the Central Lakes Trust this election as at least four new trustees will be voted in for the next term. Pam Jones talks to the trust’s retiring elected trustees about their tenure at the Central Otago and Queenstown Lakes district’s charitable pot of gold.

They give out grants of up to $11million and are the largest philanthropic trust per capita in the southern hemisphere.

But it is the gift of dozens of goldfish that is the defining memory of nine years at the Central Lakes Trust for retiring trustee Alex Huffadine.

About $13,000 a year was announced last year for a three-year project to put goldfish tanks into rest-homes in the trust's catchment in Central Otago and the Queenstown Lakes district.

Mr Huffadine said the initiative was probably just as important, and reached as many people, as some of the multimillion-dollar grants the trust had given.

"I get as much enjoyment out of seeing the little applications [grants] as the big ones. The big ones are often really easy to grant, they've been in the system for a long time and they're well founded. But the little ones, such as the goldfish in the rest-homes, probably for as many people, that's just as important."

Making decisions about "the little grants and the really big grants" has been a key focus in the lives of Mr Huffadine and another three fellow elected trustees for the last nine years, as they are all mandated to retire this election, having served the maximum three three-year terms.

Mr Huffadine, Bernie Lepper, Dr Malcolm Macpherson and Greg Wilkinson said they had completed their terms with pride, but felt good about making way for a new group of trustees who would "slot in" to excellent systems at the trust.

Having overseen grants that ranged from $11million for cycle trails in Central Otago and the Queenstown Lakes District to money for petrol vouchers for a man who drove to rest-homes to play the piano there, the four said "hand on heart" there was "no parochialism" within the trust.

However, often ideas that came from one community became "seeds that germinate" into ideas for things that could work in other districts, Mr Wilkinson said.

Mrs Lepper said the trust had always been "in really good heart", and had seen continuing strong performance from one of its important funders, Pioneer Energy, which is 100% owned by the trust and had expanded into other investments in the energy sector.

The annual dividend paid by Pioneer Energy to the trust - $10million this year - had been a significant contributor to the trust as its community changed and increased in size, and the demand on trust funds increased correspondingly, she said.

Mrs Lepper said having the opportunity for personal development, to develop new skills and represent the community in a governance role at the trust had been "a real honour".

Dr Macpherson said he had always felt "proprietorial" about the trust, possibly because he had supported its formation 19 years ago when he was a district councillor and the issue of whether to form a trust was being hotly debated within the wider community.

"I like to re-litigate that battle, point out to people that in every main street in inland Otago there are buildings, and community services, and a whole range of other assets that wouldn't exist, or wouldn't be nearly as good, if there had been no Central Lakes Trust."

He said it was not just the benefits of the trust to date that were important, it was "the next 100 years and beyond".

"The power of a trust that supports its community in perpetuity is a public good that beats all others. We - the beneficiaries of the pioneers who built the Otago Central Electric Power Board - are incredibly blessed."

The trustees said growth in the trust's catchment had necessitated a change in structure that brought stricter strategies and systems and more appointed trustees with specific expertise, although they said "more corporate" was not the right way to describe the changes.

But financial nous was not the most important quality for elected trustees, Mr Wilkinson said.

"When I first stood for the trust in 2010 I went to [former trustee] Peter Mead and said 'what's the most important attribute that a trustee needs' and he said to me 'empathy for the community is what is needed'. For the [upcoming] elected positions that's exactly what's needed."

A new structure for the Central Lakes Trust is proving its worth this election, retiring trustees say.

Five trustees will be elected this election, and at least four of them will be new, as incumbents Greg Wilkinson, Bernie Lepper, Malcolm Macpherson and Alex Huffadine are all mandated to retire.

This year is the first time the number of elected trustees has dropped, from six to five, in line with a new structure adopted in 2016.

The new structure has also had three trustees appointed to the trust progressively since 2017.

Retiring trustee Dr Malcolm Macpherson said there had been debate within the community about the appointment of external trustees when it was voted on in 2016, but this election reinforced the value of having additional appointed trustees serving staggered terms.

The appointed trustees provided continuity for the trust, especially in years when several trustees were mandated to retire, he said.

Twenty-five people are standing for the five elected trustee positions and voting closes at noon on November 22.