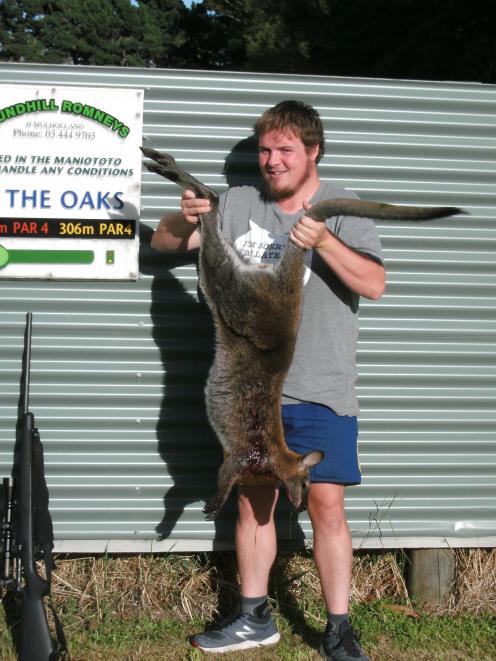 The wallaby was shot last month on the Maniototo Golf Club, in Ranfurly, by Maniototo Pest Management (MPM) after a report from the public. Another wallaby was shot in the Kyeburn area near Ranfurly  seven months ago, and wallabies or wallaby sign have also been seen in several other areas in the Maniototo, in Oamaru and near Hampden, Alexandra and Dunedin.

The development showed the extent of the wallaby problem and its potential to explode, MPM manager Ossie Brown said.

He said farmers were worried but the general public did not understand the potential damage the wallabies could cause.

"People don’t understand the seriousness of the problem. Rabbits have given Central Otago a major problem, but wallabies are going to be a bigger problem."

ORC director of environmental monitoring and operations Scott MacLean said $273,000 of ORC funding allocated this financial year to combat the wallaby problem was a start, but funding would need to be ongoing.

"Two to five years of funding is not going to be the end of it."

The shooting of the wallaby in Ranfurly was "bittersweet", as it was good the wallaby had been killed, but worrying it was found in a town area. The ORC had previously thought wallabies "out in the hills" were the problem, but attention would now also need to be focused on flat land around towns, Mr Maclean said.

Wallabies were known to be entering Otago from Canterbury over dams and bridges, but it was also possible some had been released deliberately. Anyone found deliberately releasing wallabies, which is in breach of the Biosecurity Act, could be imprisoned for up to five years and/or fined up to $100,000, Mr Maclean said.

The ORC was working closely with Environment Canterbury (ECan) on the issue, and ECan was talking to Meridian Energy about ways to stop the wallabies crossing dams. Some wallaby fencing had already been installed on dams.

Mr MacLean said the general public were being asked to help with the first stage of the ORC’s campaign, which was to research where the wallabies were. It was hard to know how many existed and where, as wallabies hid easily and their numbers were low at present.

Farmers, shepherds, hunters, mountain bikers and people in 4WDs were the main people out in the back country and they were being encouraged to report any sign of wallabies immediately to the ORC or MPM, which were working  together closely on the issue.

Public field days would be held within the next couple of months, and a co-ordinated search for wallabies organised by the ORC. Follow-up control work could then include the use of specially trained dogs.

If the wallaby population exploded, it would have a significant impact on the rural economy, Mr MacLean said.

Farmers could be faced with paying as much for wallaby control as they did for rabbit control — possibly tens of thousands of dollars each a year. They would also face additional "lost opportunity income", from wallabies eating grass, crops and feed, forcing farmers  to reduce stock numbers.

From my vantage point in Canberra, where we have genuine problems with Eastern Grey kangaroo populations, I cannot see the fuss over wallabies which are solitary animals, do not breed in large numbers and prefer bush as habitat. Or is it just a Kiwi reflex to disparage (the) Wallabies?