Wool getting around world on word-of-mouth 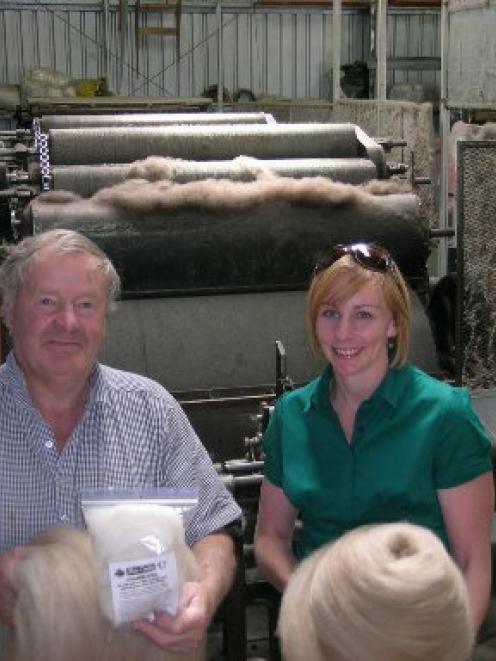 Belex Wool's former owner, Geoff Taylor, of Luggate, and operations officer Deirdre Coker, of Bannockburn, with Trampers Wool toewarmers. Photo by Marjorie Cook.
Geoff Taylor, of Belex Wools, has been quietly beavering away in a tin shed near the Clutha River at Luggate for more than a decade, producing thousands on thousands of slivers of coloured wool for spinners, weavers and wool shops.

And now, much to his surprise, Mr Taylor is producing thousands of woolly toe-warmers for trampers and skiers.

Word-of-mouth raves about Trampers Wool and its blister-preventing, toe-warming properties have spread around the world and even received a mention in The Guardian newspaper in the UK.

Previously regarded as a small byproduct of Belex Wool's core business, the humble 30g plastic bags are only worth $3.50 each and have not been promoted in any way.

But they recently came to the attention of British cancer survivor Deborah Shields, who began a trek across the Sahara Desert on March 15 to raise money for the Odyssey cancer charity and the British National Health Service.

Ms Shields' decision to order 10 packets has also helped boost international demand, so Belex Wool has decided to give 11 packets to her mission, which has already succeeded in exceeding her goal of 4000 pounds ($NZ9994).

"In one year we might pack and send off 300 packs. But if you include what other people make up (from a 1kg bulk supply), we have probably been producing closer to 500-600 bags. Now, we are going to be supplying thousands,'' Mr Taylor said.

Mr Taylor was not sure how Ms Shields came by Trampers Wool but he had been told by shops in Wanaka and in Marlborough they get a lot of inquiries about the product from overseas trampers.

He decided to package offcuts in 1999 after recalling how trampers used to keep their feet warm when he was growing up on the West Coast.

"I remember when I was 8 or 10 and my mother and father had friends staying with them and they would be going tramping, maybe into the Fox Glacier. They went out and plucked sheep's wool off the barbed wire fences,'' Mr Taylor said.

Mr Taylor does not use Trampers Wool to keep his feet warm, preferring a decent pair of woolly socks. But he stands by his product.

"It's the blister prevention. It is quite important and it's got its name from that,'' he said.

Mr Carr intends to relocate Belex Wools alongside his olive, wine, alpaca and bed and breakfast businesses at Cornish Point, Bannockburn, within the next 12 months, his operations officer Deirdre Coker said.

In the meantime, Mr Taylor is staying on to operate the machinery and find and train his successor.

The business was operated by Ross Gray and then his nephew, Les Grant, in Palmerston from 1977 until Mr Taylor purchased it in 1997 and relocated it to Luggate.

While Mr Taylor, who is also the Luggate Community Association chairman, plans to ease himself out, retirement is not a word he uses.

"I don't see myself retiring. I couldn't imagine having nothing to do. But it is certainly a chance to slow down,'' he said.

The company services a small niche market carding wool for spinners and weavers and also does some commercial work for export by firms such as Ashfords, in Ashburton.

The only other South Island carding firms are based at Raes Junction, Ashburton and Marlborough.

Most of the fleeces are obtained from people who own coloured sheep. A little white wool is also processed, along with possum and alpaca.

The fleeces are scoured to get the grease out before being carded at Luggate. They can also be dyed.

"There is not a big market for coloured wool so most people are happy to on-sell.  A lot of spinners and weavers have small farms with maybe four or five sheep and we will send it back to them [once processed],'' Mr Taylor said.

The biggest museum piece in Mr Taylor's factory is a carding machine built in 1885 at Huddersfield, in the UK.

It was shipped to New Zealand and probably started life at the Ashburton Woollen Mill before becoming "redundant'' and being purchased by Mr Gray, Mr Taylor said.

The carding machine's "little sister'' was built by the same factory in 1948 and also ended up in Mr Gray's possession.

The machines are not as noisy as one might think and conversations can be held over the whirring and clacking.

The 1885 machine was probably powered by steam and pulley, but now has a 7.5hp, three-phase motor.

The bigger machine processes bales of wool while the "little sister'' cards individual fleeces.
Mr Taylor's morning starts with a run around with the oiling can, before loading washed and dried fleeces into the machines.

The fleece is picked up by a lattice and raked with big spikes then dropped into a bin. When a certain weight is reached the feed shuts off, the bin opens and the wool is dropped on to a table.

The fleece is then transferred from one sharp-toothed roller to another, stretching the fibres out in the same direction.

The wool then goes through a funnel and comes out looking like a sausage of caramel-coloured candy-floss that is then wound into a 1kg ball.

Every so often Mr Taylor sprays the tables with water to keep the static down.

He also runs around with a vacuum cleaner to remove soft webs of spidery fibres that form on and around the machines.

It takes about five minutes to produce a 1kg ball on the big machine, while "little sister'' may take up to 10 minutes.

Production varies from week to week but there was enough work to keep one person in full-time employment, Mr Taylor said.

Mr Taylor and his wife, Jill, continue to own the Belex Wool Shop based at the Wanaka Toy and Transport Museum, next to Wanaka Airport.