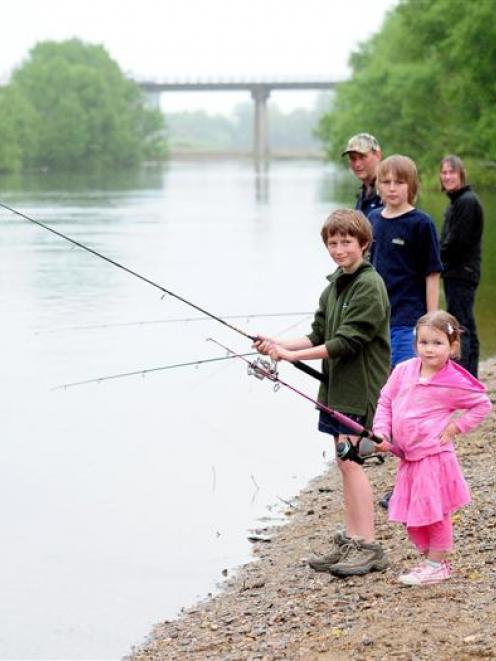 Fishing family (from front) Kate (4), Tim (11), Pete (13), Rob and Dawn Coates try their luck in the Taieri River at Outram Glen this week. Photo by Craig Baxter.
Otago's young anglers should not be treated like criminals for using a family licence to fish without a guardian, Fish and Game Otago chairman Monty Wright says.

"The young of today are the anglers of tomorrow and we should be making it easier for them to fish," Mr Wright said.

"It's time to move on and recognise there must be a better way of doing things."

Fish and Game Otago wants to change the family fishing licence rules so they covers junior anglers fishing without the adult licence holder.

At present, anglers aged 12 to 17 need a junior licence to fish without the family licence holder.

"That works fine when the licence holder or guardian is available, but it's a problem where both parents work and in school holidays," Mr Wright said.

"We think it is time to move on, and see whether the licence could be a bit more flexible."

The family licence was a fantastic initiative, but it was only a matter of time before his 13-year-old son wanted to fish with friends, but at a time when his parents were not available.

"Teens get a bit independent, so I think it's a good idea for something that lets them fish when their parents can't go with them."

Fish and Game Otago chief executive Niall Watson said other councils would be canvassed before the New Zealand Fish and Game Council was asked to change the rules for the 2011 summer angling season.

He confirmed rangers and field staff used their discretion when dealing with youths fishing without the family licence holder. They usually issued warnings.

There were 4536 licences issued to Otago families for the April-September season, more than twice as many as were issued in the scheme's first year.

The number of junior licences dropped from about 1200 to about 600 over the same period, Mr Watson said.