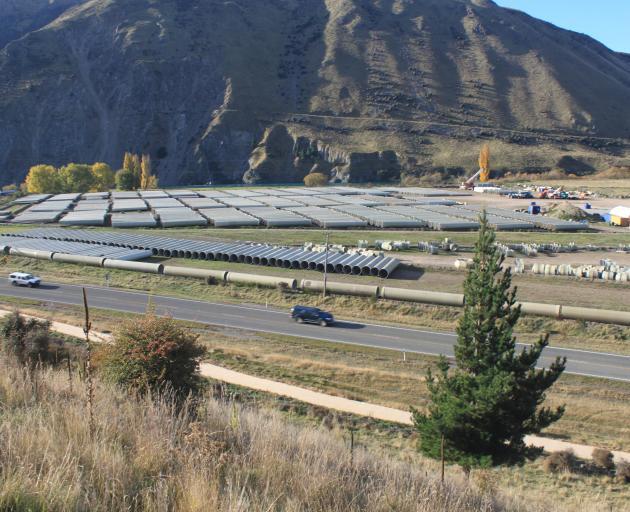 The company is replacing about 44km of ageing open canal with 37km of piped irrigation infrastructure.

However, controversy erupted when the pipeline that traverses a scenic section of the valley alongside State Highway 83, was criticised for the visual impact it was having on the area between Kurow and the $45million scheme's new source, Lake Waitaki.

The company was issued an abatement notice in late August, which stopped work on the section of pipeline.

In a statement, the Waitaki District Council confirmed the company had applied for a variation to its resource consent.

A council planner visited the site and concluded that it addressed the main issue identified, the visual impact of the above-ground sections of pipeline.

Council planning manager Hamish Barrell said the information requested included the original consented plans for the section pipeline, what has been constructed so far, and information on the variation applied related to its alignment.

Also requested were amended affected party approvals and how the company will address the large valves on the sections of pipe.

An independent commissioner will consider the application, including whether there are any grounds for notification.

Waitaki Mayor Gary Kircher said while some additional information had been requested from the company, he did not anticipate that would cause any further delays to the project.

"Give the feedback I’ve been given, I don’t have any concerns. The reports from staff are that everything is on track and if any more information is needed, that it doesn’t appear to be anything that’s going to delay the work that we are requesting to be done.

"It’s very pleasing to see the company is responding well to the timeline that's been given and is complying with requirements to get the pipeline out of the public’s line of vision and below the crown of the road.

"More of the pipeline will now be in the ground than was going to be previously and the prominent blue valves will be replaced with something far less obvious," Mr Kircher said.

"From now on it’s a back-and-forth between us.

"We’ll keep in communication with them to ensure that they comply with the resource consents and the community gets its view back."

The company had been issued a non-notified land-use resource consent, which required the construction to be "in general accordance" with the proposal lodged for the work.

A section of the proposal for the work provided to the Otago Daily Times by Mr Barrell in August stated the pipe would be set back from the road by 10m "and below the road as the road extends around the rocky bluff".