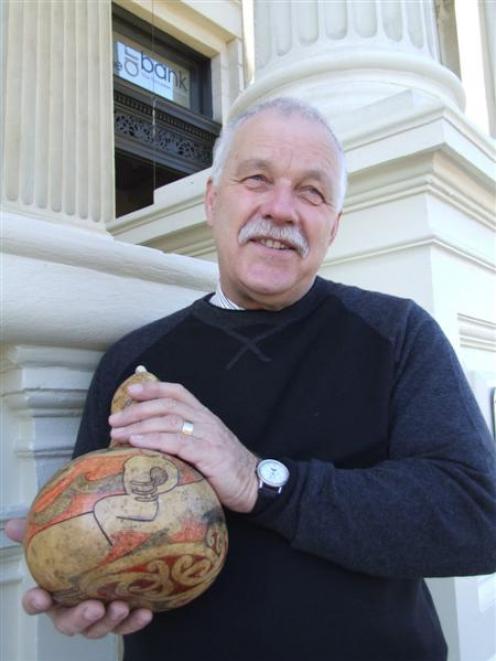 Forrester Gallery director Warwick Smith with the carved gourd he was presented with at the Museums Aotearoa awards dinner. Photo by Sally Rae.
Forrester Gallery director Warwick Smith won the individual achievement award at Museums Aotearoa's annual excellence awards recently for "tenaciously but gently pursuing his vision for a quality art gallery in Oamaru". Sally Rae speaks to Mr Smith about his 22 years at the Forrester.

When Warwick Smith first went to work at the Forrester Gallery, he was homesick for the staffroom at Waitaki Boys High School for the first couple of weeks.

He had taught art at the school for 18 years and, moving to work on his own at the gallery, he missed the fellowship of the staffroom.

He did adjust "pretty quickly", he recalled this week.

More than two decades later, Mr Smith (61) is still at the Forrester Gallery - no longer on his own but working alongside staff and volunteers - and intends being around "for a wee while yet".

The presentation of the achievement award during a gala event in Gisborne last week was the highlight of his tenure at the gallery, along with the donation of the Parsloe collection of Colin McCahon paintings.

Mr Smith is the second winner of the achievement award.

The first recipient was his good friend Jim Geddes from the Eastern Southland Gallery, and to receive the same award was "quite special", he said.

He was thrilled to receive a carved gourd, made by the local Maori community, which was a very special keepsake.

The selection panel described Mr Smith as a "beacon" for the art world in the South Island and beyond, "tenaciously but gently pursuing his vision for a quality art gallery in Oamaru with wholehearted commitment".

In addition to his expertise in mounting and managing exhibitions, he was acknowledged for his ability to foster the development of artists, gallery staff and volunteers.

Mr Smith acknowledged the friendship and support of past and present staff, saying they worked "very much as a team".

He was also grateful for the support of the gallery volunteers and Friends of the Forrester.

The gallery had been fortunate to have had a very supportive and sympathetic [Waitaki District] council and senior management.

The council was "visionary" and much larger centres in the North Island had only recently opened art galleries and museums.

"In Otago, we have so many wonderful facilities," he said.

He also acknowledged the support of his wife, Libby, for her patience "in what has all too often been her role as a gallery widow".

It has been included in the council's long-term council community plan, subject to the gallery's ability to raise external funding.

Mr Smith was delighted the council had taken on board the McCoy-Wixon concept and he was very optimistic it would be achieved one day.

He was particularly looking forward to the installation of a lift, which was going to be a "red-letter day".

In the meantime, Mr Smith - the gallery's third director since it opened in 1983 - was kept extremely occupied with a very busy exhibition programme.

The focus was unashamedly regional.

White gloves were donned for everything which came in the door, whether it was prestigious touring exhibitions or work from local schools.

"Everything is worthy of equal respect and consideration," he said.

Mr Smith has been preparing a very special Anzac exhibition, by Michael Shepherd, commemorating the Battle of the Somme in 1916.

He is looking forward to an exhibition featuring works from the gallery's collection selected by people who have worked at the gallery over the years, called "Been There Still Here Done That".