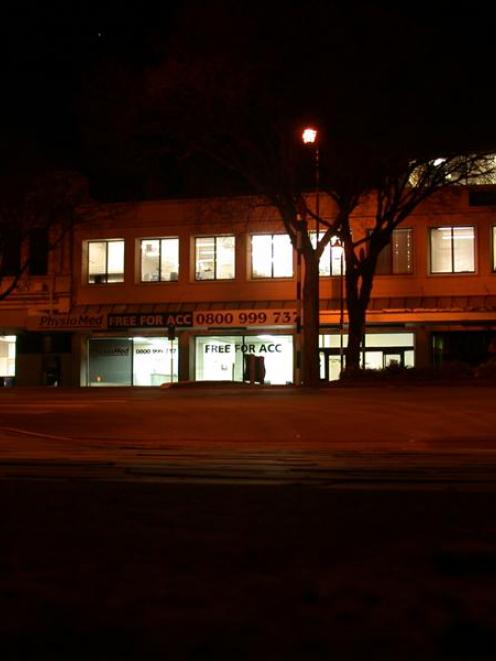 The TrustPower and Pulse Business Solutions building in Oamaru last night, lit up but empty because of a bomb scare. Photo by David Bruce.
A bomb scare closed part of the Oamaru central business district for more than five hours yesterday in a hoax police branded "irresponsible".

The business district in lower Thames St was brought to a halt just before 3pm as police evacuated buildings and cordoned off the area after a bomb threat was received at 1.50pm through a call centre operator at TrustPower in Tauranga.

"We received an anonymous phone call into our Tauranga-based call centre saying there was a bomb in the building," TrustPower spokeswoman Pip Tschudin said.

TrustPower calls were handled at either the Tauranga or Oamaru-based call centre, she explained.

"As a result, TrustPower contacted the police in Tauranga and Oamaru."

Police were sent to the Tauranga site, but that building was not evacuated, she said.

More than 40 TrustPower staff were evacuated.

Also evacuated were staff from the Waitaki District Council headquarters, from the North Otago Museum and from the Oamaru Public Library.

Thames St between the Boer War monument south to Itchen St was cordoned off, businesses and offices evacuated, and staff were sent home because there were no customers.

A bomb detector dog was dispatched from Christchurch, arriving at 6.20pm.

The building was declared safe by 8pm.

Acting Senior Sergeant Peter Muldrew said the hoax was a major disruption for part of the town.

"I don't know if people realise the consequences of their actions. This is an irresponsible thing to do and a waste of resources," he said.

The incident came just a day after an Oamaru man was sentenced in the Oamaru District Court for making a false statement and sparking a bomb scare at the Shell service station in February.

Yesterday's bomb scare was not connected to that incident, Snr Sgt Muldrew said.

Waitaki District Council building inspector Shane Napier praised the work of the police, saying officers had "kept the fuss to a minimum".

Sally-Ann Donnelly, from pub-restaurant Fat Sally's, who had to send several customers away, said it was an inconvenience and a nuisance.

"If it's a hoax, they need to catch the losers," she said.

She was serving coffee to firemen late yesterday afternoon and said it was "just a waiting game" until the street was reopened.

Oamaru library manager Lorraine Weston-Webb said about 10 staff and 20 members of the public were in the library and adjoining museum when the evacuation was ordered.