By Daniel Birchfield
0 Comments
Kakanui is a well-known surfing destination to many, but perhaps not for the form brothers Patrick (19) and Sjors (16) Ens have been enjoying recently.

Determined to free themselves from the shackles of school holiday boredom, the pair came up with a novel way to pass the time as the days dragged on - and all it involved was a car, a length of rope, a wool sack, a car tyre and a couple of pieces of wood. 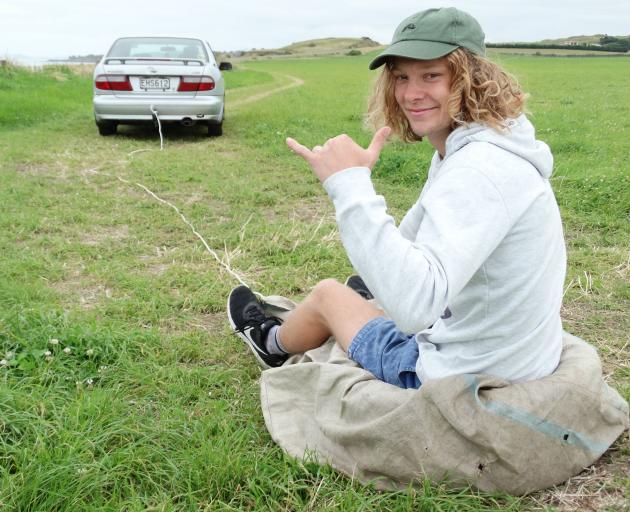 Patrick Ens gets set for some grass surfing at his family's Kakanui property yesterday. The 19-year-old and his brother created the pastime to add some excitement to the school holidays. Photo: Daniel Birchfield
It is all pretty simple really - the tyre is placed in the wool sack, with wood placed inside the tyre for support. The sack is then tied to a length of rope and the other end of said rope is tied to the tow ball.

Then it is just a matter of sitting on the tyre and holding on at speeds of up to 80kmh around the large family property in Beach Rd.

The idea has caused quite a stir since Patrick uploaded a video of one of his wild rides to YouTube.

As of yesterday afternoon, it had had more than 800 views.

''It's holidays and I was a bit bored one day so I thought 'what can we do to entertain ourselves?', me and my brother'', Patrick said.

''It turned out to be a lot of fun so I thought I'd make a video out of it and share it with some other people.''

The tyre in a wool sack design came after some experimentation, Patrick said.

''First of all we thought we might do it with a skateboard without trucks and wheels on it, but it just wouldn't slide.

"We progressed to a skateboard with wheels and that was really good, but you couldn't go too fast because you just fall off and hurt yourself. Then, we decided to put a tyre in a sack ... we just hoon around and you can go a lot faster with that, that's for sure.''

He said the only issue with being dragged at high speed was ''grass spitting up from the car smacking you in the face''.

Patrick was happy but slightly bemused at the attention the video had received.

He has posted videos of himself surfing or tramping which usually managed ''a couple of hundred'' views.

His response to people who might consider his conduct unsafe was simple: ''I totally agree with them. It is stupid and dangerous. But, we are on private property and we're just having a bit of fun.