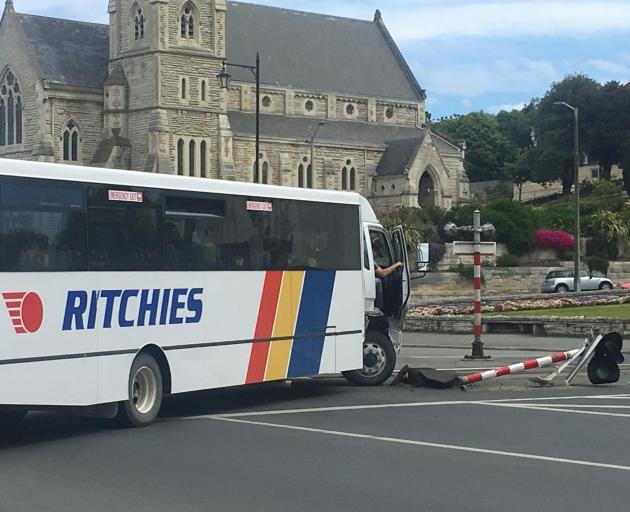 The accident happened about 2.15pm, when the Ritchies bus travelling south on lower Thames St towards Itchen St, carrying about 45 years 4 to 8 Glenavy School pupils and five staff, struck a railway crossing pole while attempting a tight right-hand U-turn across the street's railway lines.

Glenavy School principal Kate Mansfield, who was not on the bus at the time, said the drama unfolded when pupils and staff were being ferried back to the school after they had visited the Forrester Gallery to take part in activities before Oamaru's Victorian heritage celebrations.

She said a staff member on the bus sent her a text message describing the accident and a photograph of the damage.

While some children were shaken, she confirmed no pupils or staff were injured.

The driver was also uninjured.

A staff member at a nearby business, who did not want to be named, said she heard a ''loud bang'' and rushed outside to see what had happened.

She was greeted by the sight of the pole lying on the ground with part of the bus's body, a small section above its front right-hand wheel, attached to it.

The woman then called police before KiwiRail staff arrived at the scene to inspect the damage about 2.30pm.

The bus was able to be driven back to the Ritchies depot in Nen St, where it was swapped for another so pupils and staff could continue their journey.

Calls to the Ritchies Oamaru branch were not returned yesterday.

A police spokesman confirmed police attended the scene and that no injuries or traffic issues had been reported.

The Waitaki District Council had been notified, the spokesman said.