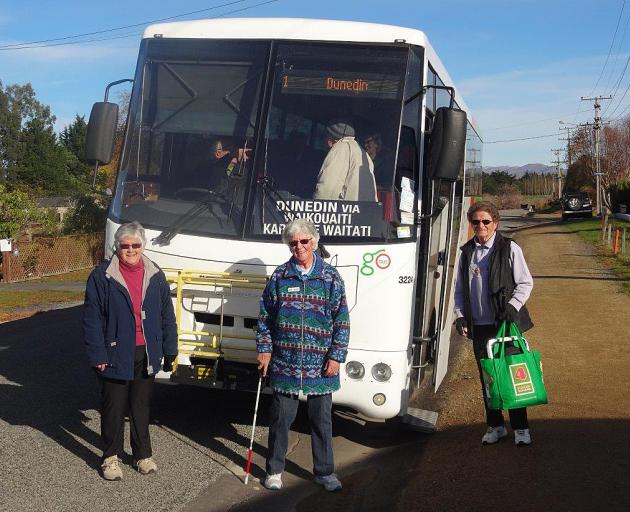 Campaigners, from left, Shirley Hewlett and Aynslie (correct) Beaton, with passenger Jan Vincent, at the Fell St bus stop in Waikouaiti. The women are gathering signatures on a petition to have bus shelters installed at local bus stops. PHOTO: BILL CAMPBELL
As people power pays off and the Palmerston town centre bus stop moves back to the Bond St site, after a year of complaints from bus users, Waikouaiti bus users are warming up for their own bus stop battle.

The Palmerston bus stop was moved back to Bond St from the stop on Sanday St, two days after the Waihemo Community board unanimously supported the move at its meeting last Monday, following the presentation of a petition signed by 231 people.

Bus users complained that the Sanday St stop approved by the board last May lacked shelter, was poorly lit and was subject to heavy frosts.

Now, Waikouaiti bus users want five shelters installed by the Otago Regional Council and the Dunedin City Council at bus stops around the Waikouaiti bus route, where people often have to wait without shelter.

Waikouaiti residents Shirley Hewlett and Aynslie Beaton gathered 21 signatures on a petition to the ORC and DCC from users in the bus loop area around Thomas, Fell and Beach Sts last week for presentation to last Wednesday's Waikouaiti-Coast community board.

If they had had more time, more signatures would have been gathered, Mrs Hewlett said.

Board chairman Alasdair Morrison said after the meeting some bus shelters were available and he hoped three would be installed `within weeks'.