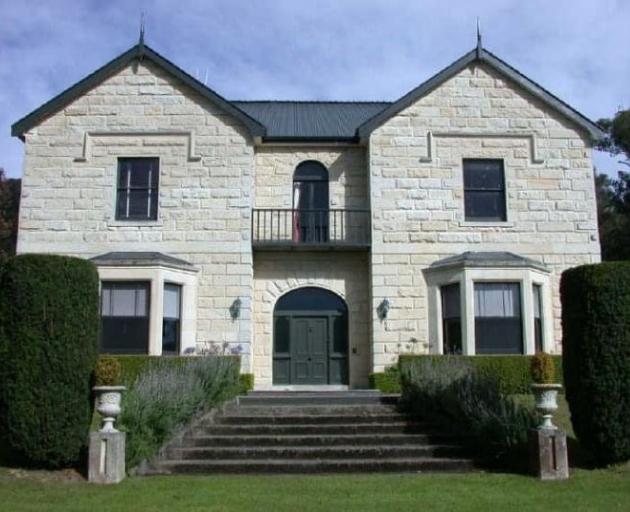 The Oamaru stone facade of Casa Nova House will be restored in September, once scaffolding has been erected. PHOTO: SUPPLIED
It was love at first sight for Pukekohe pair Katrina McLarin and Brenda Laverick when they first drove through the gates of Casa Nova House in April last year.

Now, they are knee-deep in renovations to return the historic homestead to its former glory.

The restaurateurs visited Oamaru, after cycling the Otago Central Rail Trail in March last year, and decided it was a place they could live. They looked through a couple of properties but found nothing suitable.

Back home in Pukekohe, Ms McLarin discovered Casa Nova House online, and within a week they were back down south to see it in person.

The photos online weren’t quite an accurate reflection of the current state of the building, Ms McLarin said. They had obviously been taken some years ago.

“But the moment we entered the property, there was something about it we absolutely loved,” she said.

“The energy in it is just amazing. It just has a real vibe about it.

“By the time it took to go through the front door, to the dining room, to the kitchen, I said to the agent, contract?’. He thought I was joking.”

The women took ownership in July last year with the vision of straight away reopening the restaurant, which closed 20 years ago.

But after wintering in Oamaru, they have had to rethink their plans.

Their Pukekohe restaurant Poco Loco relied completely on the domestic market, and tended to be busy year-round. Whereas Oamaru was heavily reliant on tourists

It was colder and locals tended to hunker down for the winter, Ms McLarin said.

“So it made us really look at how we were going to do this and how it could be viable.

“Buildings of this nature, for them to survive and go into the future, they need to generate some type of income, so they do remain viable.”

Ms McLarin said as well as the restaurant they were looking at running functions and events on site, and were very keen to make the place available to the public again.

“So many people have an experience and a memory here. We’re trying to bring it back for the next generation of Oamaruvians to have a memory. There are so many possibilities.

“Next year Casa Nova is 160 years old. And we really should try and organise something for that. I think it’s important buildings like this aren’t forgotten.”

The pair had worked with local tradespeople for all the repair work, and Ms McLarin said since the Covid-19 lockdown, it had been a bit of a juggle getting everyone back on site. But in September, scaffolding was due to go up on the outside of the building, so work could begin on fixing up woodwork, reviving the stonework and replacing guttering and downpipes. They were hoping it would be ready to open to the public by October.

She said they had found the Waitaki District Council particularly helpful to deal with through the whole process.