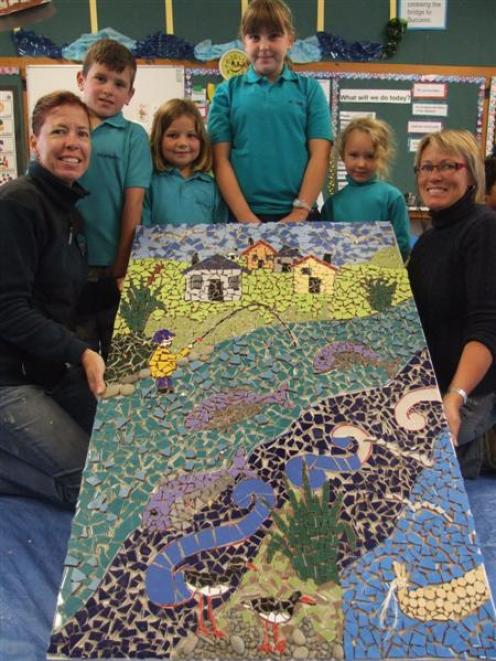 Glenavy School pupils Ben Tiffen (8), Lucy Hellewell (7), Brittany Caldwell (11) and Ella Andersen (5), with Lyn Keen (left) and Kirsty Clayton admire a panel depicting the fishing huts near Glenavy. Photo by Sally Rae.
Those attending a school reunion at Glenavy next month will be greeted by the sight of some striking art work as they walk through the main gate of Glenavy School.

A combined reunion of Glenavy School, which celebrates its 120th anniversary this year, and Waitaki Bridge, Hilderthorpe, Tawai and Grays Corner schools, which no longer exist, is being held on March 20-22.

To mark the occasion, all 77 of the school's pupils have been working this week on five mosaic panels depicting themes of Glenavy.

They have been guided by Kirsty Clayton, who lives near Waikouaiti, and Lyn Keen, from Palmerston, who have been doing school projects for about three years and also teach adult classes.

Mrs Clayton said they were "thoroughly addicted" and they loved to pass that addiction on.

The project at Glenavy had been completed quicker than expected because the children were so motivated and enthusiastic.

The pupils, working in house teams, started on Monday and there had also been a lot of parent and community help.

"This is Glenavy in all its glory," Mrs Clayton said.

One of the highlights will be the official opening of a new classroom.