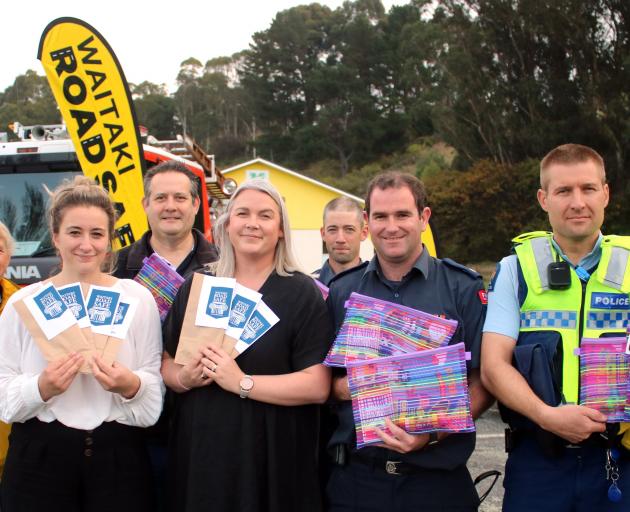 The group has launched the Waitaki Road Safe Activity Pack or WRAP, aiming to keep children happy and calm after a traumatic event, such as a car accident or fire.

The packs, which include an activity book, pencils, a pack of cards, bubbles, and a pamphlet about Waitaki Road Safe with colouring-in pictures, will now be carried by St John, Fire and Emergency New Zealand and police to be given out to children at incidents.

Waitaki road safety co-ordinator Jason Evered suggested the idea to the group 18 months ago, having handed out a similar pack when he was a police officer in London.

After the group secured funding through Fenz, thanks to the organisation’s Waitaki group manager Mike Harrison and volunteer support officer Kevin Murdoch, 150 packs were created and distributed to the district’s emergency services.

Emergency services were always busy at the scene and those involved could end up waiting there for hours. It could also be a frightening situation for children.

Constable Howard Jackson, of the Oamaru road police, said that although emergency services personnel always made time to talk to children, they could often be the "forgotten element".

Parents also had a "enough on their plates" when there had been an incident and knowing their children were entertained could help keep everyone calm.

"It’s just nice to make something positive out of something sad that’s happened," Const Jackson said.

Mr Evered said he was thrilled that the packs had come to fruition and praised Waitaki Road Safe for its work in the district.

"It’s just another example of the good work that they do — and the majority are volunteers," Mr Evered said.

Waitaki Road Safe president Jo Anderson said the group was dedicated to supporting its emergency services and the packs were part of that.

The 500 packets, a timely reminder of the affects of the change in weather conditions, would be given out by emergency services and Plunket, Ms Anderson said.