Colourful and quirky in the witch’s den 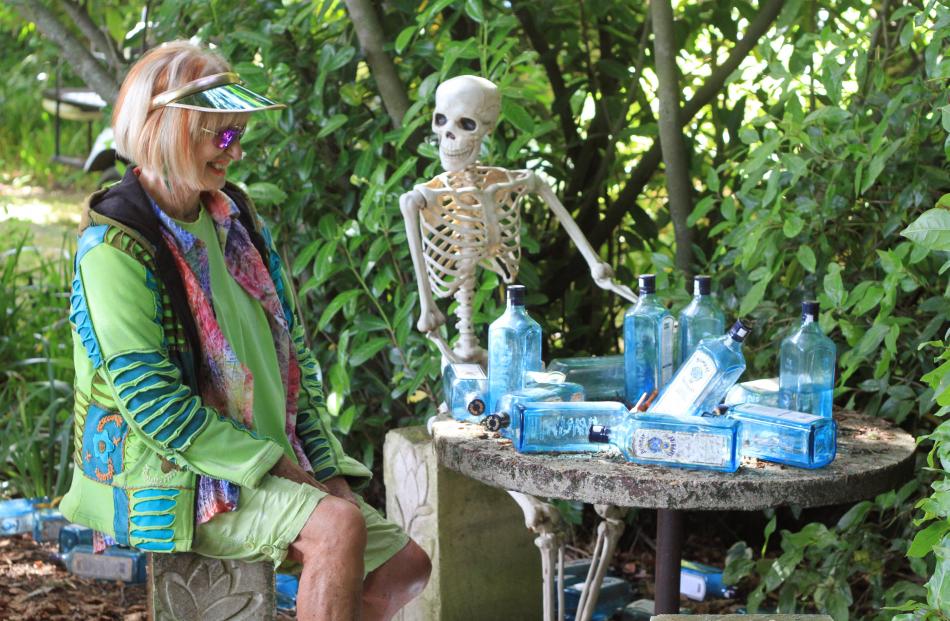 JJ Rendell and a gin-loving skeleton are set for a garden party. Photos: Hamish MacLean 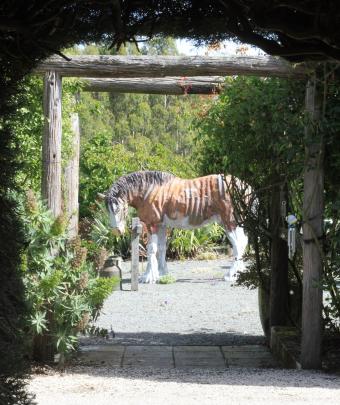 JJ Rendell calls this Jeff Thomson sculpture Seigfried, and if you touch the right place, it whinnies.

Class and kitsch collide at the edge of Oamaru. Jennifer Jane Rendell has on her luxury property created a collection of art and objects that rivals anything else New Zealand’s quirkiest town has to offer. Hamish MacLean scores a tour.

From a distance, Brookfield Park, in Weston, is nothing but stately — stylish and sophisticated.

But the circa 1880 Heritage New Zealand category 2 home and 5.3ha estate have, for more than a decade, been transformed not only into a surprisingly modern home with a well-manicured garden, but also an esoteric menagerie.

Sculptures and installations inhabit every corner — some conventional, some less so.

In 2003, Jennifer Jane (JJ) Rendell, a self-described "quirky collector", bought what was then a "disintegrating old country house" and has worked on the house and the gardens to a point where now the property has "just reached its optimum" and needs only "some fine-tuning and manicuring".

"It had beautiful bones," Ms Rendell says of the house at the time it was bought.

"The garden — it had established trees, but the rest was just a wilderness.

"It was just a tangle of jungle and mess. 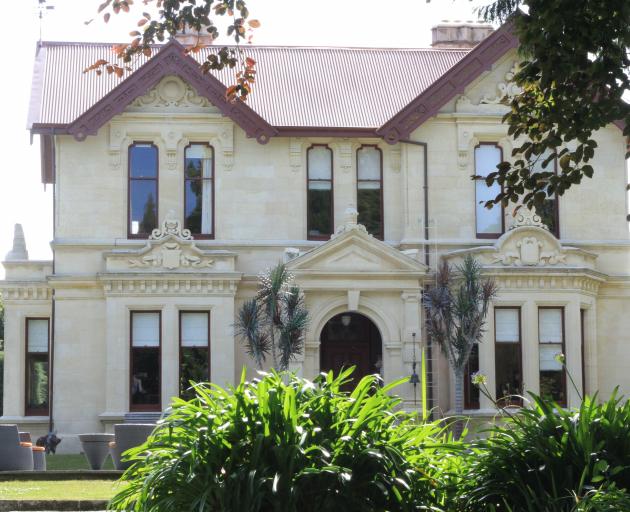 The cabbage trees at the front of Brookfield Park are sculptures too.
"But I grew up in Auckland in the war — when Dad was at war — at my grandparents’ place in Auckland ... a beautiful house like this ... my first five years — and I always felt I would like to replicate it."

The house was designed by early Oamaru architect Thomas Forrester for John Gilchrist, the first mayor of Oamaru. It stayed in the Gilchrist family until the 1960s and was soon converted into a functions venue.

"With everything, I’ve got an imagination, which is sometimes to my detriment," Ms Rendell says.

"I could see what potential was there."

What was once the function hall was demolished and the materials from the hall were used to create a rustic loggia nearby, while a pond with a boardwalk surrounded by native grass was created in the hall’s place.

The pond now backs on to a new sun-lit orangery.  The old manager’s house on the grounds has been converted to a guest house.

The main house is filled with artistic treasures.

A witches’ cave haunts the grounds at Brookfield Park.
Ms Rendell began in the garden with a mix of exotic and native planting, and the birdlife is as obvious as her two English bull terriers, Hetti Spaghetti (2) and Hetti’s great-uncle Digby (11), who follow her around the grounds.

The long drive up to the house finishes with a weeping elm that spreads across the drive. But all is not as it seems: a large Oamaru stone Alice’s White Rabbit, by Australian Warren Luke, sits prominently to the south of the house; the two cabbage trees at the front entrance are in fact realistic iron sculptures by Jeff Thomson.

And when the Otago Daily Times came to visit over the holidays, a large model of the floppy-eared Star Wars character Jar Jar Binks stood in the doorway.

Mannequins stood by the window in the billiards room; across the hall a skeleton hunched over the keyboard of an old computer.

"Making something from nothing, I suppose, is the thing I love as a challenge," Ms Rendell says.

There is a lot of laughter on the tour given to the ODT.

It takes about an hour and a-half "to walk the garden properly",  so the tour is conducted in a golf cart.

This rustic piece by Jeff Thomson blends in with the backyard loggia.
Luke’s Alice’s White Rabbit was complemented by a massive Oamaru stone piece called The Warrior. Luke’s wife, Margaret, has created a series of darkly comic heads she has called Grotz.

And near a headstone that reads "RIP Santa Claus", a skeleton sits alone at a table surrounded by empty blue bottles of Bombay Sapphire gin.

After winding through macrocarpa hedges, the tour stops at another Thomson piece, a near life-size corrugated iron Clydesdale stallion Ms Rendell calls Seigfried, which occupies a stables area.

At the press of a "button", the horse whinnies.

Only once Ms Rendell points it out can you hear it is not a recording of a horse at all, but Ms Rendell herself.

"In the Bay of Islands, because we were isolated as a 10-year-old, I used to whinny to the turned-out Maori horses that lived in the hills," she says.

"They would all come down. I’ve just always, always whinnied. So we put it on Seigfried."

And then, a piercing witch’s cackle sounds across the garden.

Ms Rendell admits to having a special fascination with witches and the supernatural.

"I am sort of a bit of a witch; I really have a lot of premonitions that come true.

"I love ghosts ... all the Gilchrist family who built Brookfield, all but two of them died at Brookfield, so the house must be full of ghosts."

"In the old days", without refrigeration, beer was kept cool during garden parties in a dark enclosure, a circle of cupressus trees, which the tour now enters.

Witches stand illuminated in the dark, stirring a cauldron. Cries of "Let me out! Let me out!" come from a caged creature in the corner.

There is more laughter.