By Kayla Hodge
0 Comments
When Kate Webster took her two daughters along to a spin-a-thon fundraiser, she expected them to entertain themselves.

Instead of kicking a ball around, however, Grace and Georgia opted to hop on a bike and ride with their mother in the North Otago Plunket "Lycra for Littlies" spin-a-thon on Saturday.

Together, the three of them worked up a sweat for an hour, as they played their part in Mrs Webster’s team at the Waitaki Community Recreation Centre.

Other team members, all mothers, who all took part in a boot camp at the recreation centre, cycled at various times throughout the event to raise money.

Plunket was an organisation close to her heart, Mrs Webster said. 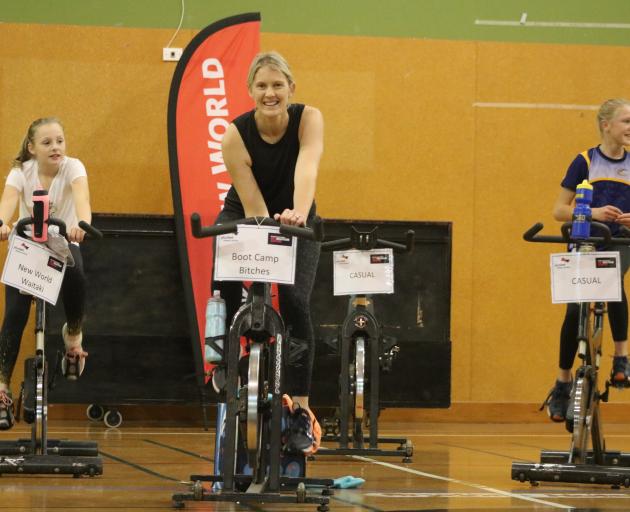 Kate Webster rides in the North Otago Plunket ‘‘Lycra for Littlies’’ spin-a-thon flanked by her daughters Georgia (10, left), and Grace (11). PHOTO: KAYLA HODGE
The former paediatric nurse was introduced to the organisation through work, but also took her daughters to Plunket when they were born.

"It’s an organisation that we need to support more than ever in today’s society."

Two years ago, the boot camp team took part in the inaugural spin-a-thon, and biked alongside Hayley Carter, who rode for 12 hours. Carter rode in memory of her daughter who died, and Mrs Webster said it was an emotional experience.

About nine teams entered the event and two Oamaru businesses sponsored bikes for anybody to ride throughout the day.

Recreation centre manager Di Talanoa taught various classes throughout the day, and was pleased to see everyone enjoying themselves.

Plunket community services leader Catherine Caley said she was rapt with how the event turned out — "in these post-Covid times you never know how it’s going to go".