Efforts continuing in bid to stabilise and repair streets 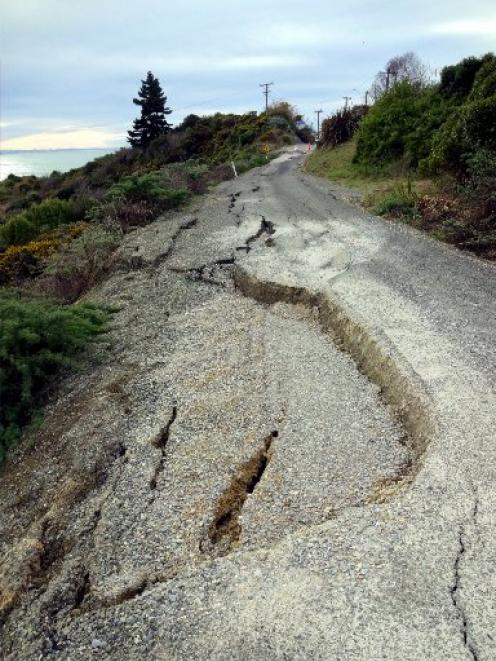 Cracks and slumps on the closed section of Haven St. Photo by Bill Campbell.
Rain in the past month has weakened the unstable ground on Haven St in Moeraki, keeping the road closed until a ''cost-effective repair is agreed'', Waitaki District Council Assets group manager Neil Jorgensen said in a recent report to the Waihemo Community board meeting.

Council roading manager Michael Voss yesterday said the normal 25-year life expectancy for road reconstruction did not apply to Haven St, and was only expected to last ''over the summer period''.

Due to the expense and difficulty of reconstruction, he did not want to raise false hopes of the street reopening but the council was upgrading Tenby and Haverford Sts to ensure access to Moeraki, Mr Voss said.

Mr Jorgensen said the council would consider approaching the New Zealand Transit authority for funding to restore the streets if and when a project was agreed, as with any project.

The Tonkin and Taylor report from their recent investigation at Haven St has been delivered to the council and recommends identifying all surface drains, ponding areas and potentially unstable sections before starting test pits to determine the practicalities of how and where to build future road formations in the mudstone.

Directional drilling to relieve high groundwater pressure by the affected houses is proposed, a plan the council was working through, Mr Jorgensen said.

The report also highlighted the vulnerability to movement from sustained rainfall, due to the differing permeability of underlying materials. The report noted recent rain had reactivated numerous slips that had been dormant for about 20 years.

The focus of the Waitaki District Council has been on maintaining access to Moeraki via Tenby and Haverford Sts. A contractor had sprayed centre lines, continuity lines and some direction arrows on the streets, he said.

''No Exit'' and ''Moeraki village'' signs had been ordered and would be erected once available.

A surveyor had been employed to survey Tenby and Haverford Sts to determine road boundaries to allow further road widening within the legal road corridor, with that work expected to take about three weeks.

Council funds already set aside for targeted maintenance in the town, would be used for localised widening and constructing passing bays.

Council roading contractor South Roads will undertake improvements and safety works at Moeraki and Mr Jorgensen said this would be done without affecting their ability to complete other reinstatement works throughout the Waitaki district.

Moeraki was being inspected weekly to monitor movements and to keep up with the levelling of any subsidence, Mr Jorgensen said.