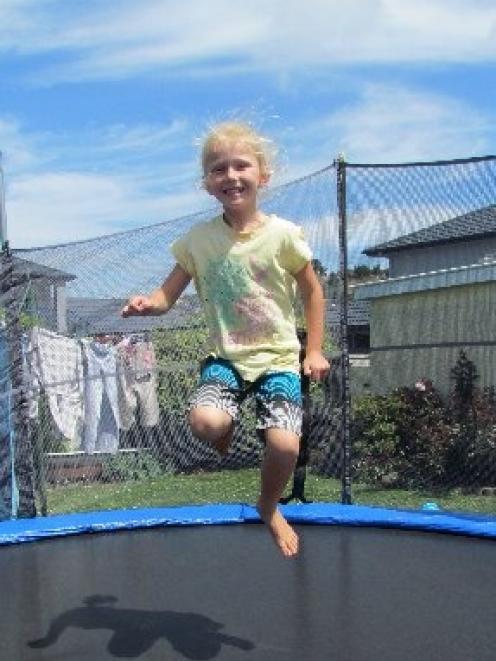 Oamaru girl Emjai Welsh jumps on her trampoline, having removed the external sound receiver for her cochlear implant. She needs to raise about $50,000 in the next year for an additional implant for her left ear. Photo by Ben Guild.
Imagine being 5 years old, hearing the sound of an oncoming truck, and not knowing from which direction it was coming.

Or waking in the dead of night and not being able to hear a thing.

How about having to remove your external sound "receiver", which transmits sounds through the skin to a small circular "antenna" behind your ear, before bouncing on a trampoline, for fear of electric shocks.

And what if your parents were told, by the Government of the land, that it was unnecessary for you to be able to hear in both ears?

Oamaru girl Emjai Welsh does not have to imagine.

From the moment she was born, five and a-half years ago, and placed into a neonatal unit because she was premature, it was clear to her parents not all was right with their little girl.

She was referred for hearing checks at 3 days old because her father, Ryan, had a hearing impairment.

An assessment followed in Dunedin, after which the family was told nothing was wrong with Emjai's hearing.

Yet the signs persisted.

While Emjai was in the neonatal unit, an orderly dropped a tray, sending its contents crashing.

The babies in the room began to scream. Emjai did not make a sound.

More hearing tests followed after six months, which Emjai failed, but the reasons for her failure were not given, apart from the possibility she was still too small.

When she was 9 months old, having grown out of the babbling baby stage, she stopped making sounds altogether.

Her parents demanded she be retested at 18 months of age at the audiology department in Dunedin.

She was, and her parents were told nothing was wrong.

"We had the whole: 'You're projecting it on to her,"' Ms Rapson said.

A further assessment was performed a year later - two and a-half years after Emjai's hearing was first tested - and it was found she was profoundly deaf.

The diagnosis, when it finally came, was "kind of a relief if anything", Ms Rapson said.

Emjai underwent surgery in May 2009, receiving a government-funded cochlear implant for her right ear at a cost of about $50,000, giving her between 80% and 90% hearing in that ear.

The couple, who have medical insurance, expected a second implant for Emjai's left ear to follow, but instead found they had misunderstood their policy, which covered cochlear implants but excluded congenital and genetic conditions.

With no government funding available, and without the means to pay for the second implant, the family continued to transport Emjai to Christchurch for regular checkups, and enrolled her at Pembroke Primary School in August last year.

There, teachers wear FM equipment which transmits their voice straight to Emjai's implant, allowing her to learn alongside other children.

The curious, energetic girl has excelled, and announced with great pride on Tuesday that she would begin year two as a 5-year-old in just "eight sleeps".

She was excited about receiving her new school books, but was disadvantaged in the classroom despite her natural gifts, Ms Rapson said.

"Academically and physically she's great. It's the communication that's letting her down," she said.

"She has to concentrate on hearing and learning at the same time."

That did nothing to dull her enthusiasm for school, though.

"She'll talk to anybody. Some younger kids don't persevere with conversation but the older kids do.

"She can be really hard to keep up with. She throws a hissy fit if you pick her up from school early," Ms Rapson said.

Mr Welsh agreed: "She's the only kid I've ever known that makes you do homework at night - even when she's already done it."

As far as the pair know, Emjai is the only primary school-aged child in North Otago to have a cochlear implant.

A second one, for her left ear, would make all the difference.

"Education-wise it would offer up so much more for her," Ms Rapson said.

The problem is time is fleeting.

Emjai can only hear some low frequencies in her left ear - about 10% of an ordinary person's range - and that will further deteriorate in the next year.

"If she goes too long without any implant whatsoever, she will not hear anything [in her left ear]," Ms Rapson said.

Cochlear implants are implanted in babies only months old to allow them an opportunity to learn to form sounds properly.

Emjai's speech has already been affected, because of the length of time it took for her to receive her first implant.

While the second implant would not repair her speech, it would probably prevent further difficulties in forming sounds.

Without government funding, the family is reluctantly turning to fundraising initiatives.

"We're not the sort of people who like asking for help. So it's hard to put out there that we are looking for so much money," Ms Rapson said.

Sausage sizzles, a charity golf tournament, raffles and cheese rolls have all been floated as possible fundraising initiatives, as the family endeavours to raise funds before appealing to charitable organisations for contributions.

A Facebook site - Emjai's Endeavour To Hear - has also been set up seeking donations.

But Ms Rapson is questioning why it should ever have come to this, and hoping to raise awareness of the issue nationally.

"This whole process is about making people aware these kids should have two implants, not one," she said.

Ministry of Health spokesman Kevin McCarthy said the needs of children were prioritised over those of adults.

The average cost of the procedure is between $45,000 and $55,000, including assessment, the device and surgery, audiology, rehabilitation or habilitation, and maintenance and support for up to five years after the surgery.

In most cases, the provision of one implant was sufficient to allow a person to hear effectively, and for most children to develop speech, Mr McCarthy said.

However, he added research suggested children who were born profoundly deaf experienced better speech and language development with bilateral implants.

The ministry's policy is to "ensure that every child who is assessed as needing a cochlear implant is able to get one when they need it", and although requests for bilateral implants were increasing, the ministry "has chosen to ensure that all children who need an implant can get one", which is "only made possible by the decision to provide a single implant".

People who have had meningitis might have bilateral electrodes funded when it was clinically recommended, but an extension of the clinical criteria was unlikely, he said.

There was no "legal" definition of deafness, meaning those who sought a second implant elected to fund the second implant privately, which, when installed in the same operation, cost about an additional $25,000, he said.

With no plans for amending entitlements, and with perhaps less than a year before it will be too late, the clock is ticking. Only, Emjai cannot hear it.