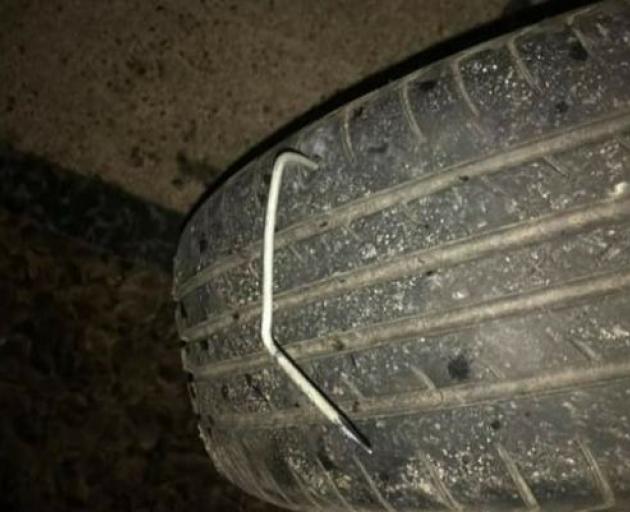 A nail embedded in an Oamaru resident’s car tyre after it used the accessway at the rear of the Caltex service station in north Oamaru. PHOTO: SUPPLIED
Allegations of nails being intentionally scattered at the rear of an Oamaru service station, damaging vehicle tyres, is a serious matter that jeopardises public safety, police say.

Jesse Noordermeer posted a photograph on social media on Friday that showed what appeared to be a Z-nail embedded in a friend's car tyre.

The incident happened the same day as the vehicle's owner drove down the accessway of the Caltex station in State Highway 1 in north Oamaru, owned by the Oamaru-based McKeown Group.

The owner, who did not want to be named, did not report it to police, but Sergeant Blair Wilkinson, of Oamaru, said they were aware of similar incidents.

The driver was alerted to the nail by a "rattling" sound.

"I was quite annoyed when I saw the nail because I knew it was going to cost me money to fix the tyre and everything."

Sgt Wilkinson said if it was deliberate it was a serious safety risk.

"To put something on the road with the intention of causing damage to people's vehicles can go beyond simple wilful damage in the event that it causes somebody to crash. There's potential for charges of endangering safety, which carries a 14-year term of imprisonment."

Mr Noordermeer, a former Caltex employee, said similar nails had been found there in the past.

"I worked there for about eight months and we were picking up these things nearly every day. When I was working there ... over the week we'd probably pick up at least 10 of them just out of the driveway. We used to have big piles of them, all shapes and sizes. Sometimes they were rusty nails bent over, but most are made out of that No 8 wire.

"Who knows how many people have had nails go through their tyres?"

Staff at three transport companies contacted by the Otago Daily Times yesterday - Bennett Transport Ltd, Maheno Transport Ltd and Mainfreight - said no trucks in their respective fleets had been damaged.

McKeown Group managing director Ken McKeown did not respond to a request for comment by deadline yesterday.