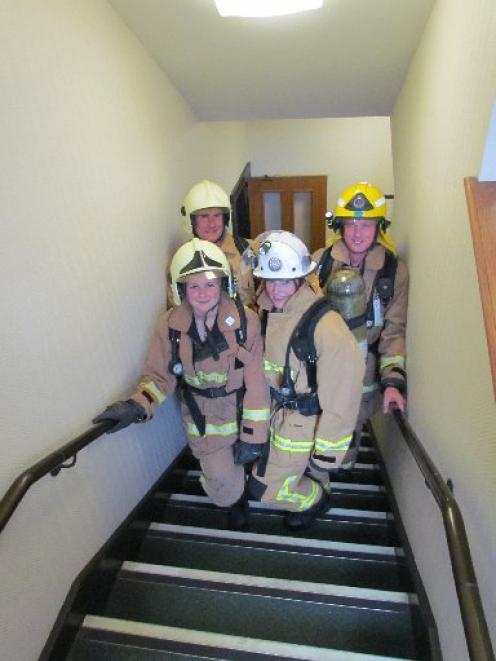 Dr Rotarangi said the Otago authority was very proud of Ms Bell, who would have about 280 volunteers backing her.

Ms Bell, who is also the first Otago woman firefighter in the challenge, has raised about $2000 so far for Leukaemia and Blood Cancer New Zealand, a national charity that supports patients and their families living with blood cancers such as leukaemia and related conditions. If she sells the rest of the tickets in her raffle, that could reach $3000.

While yesterday she ran, in a full firefighting outfit weighing 25kg, up the Waitaki District Council headquarters' four floors (from the basement) with 74 stairs, in Auckland it will be 51 floors with 1103 stairs, also in full kit.

Ms Bell went up and down the stairs three times. The others, also in full firefighting kit, completed one circuit each.

A member of the Kakanui Volunteer Rural Fire Force since she was legally able to join at 16 years old, Ms Bell

has been training since November when she was confirmed as a starter in the challenge.

Yesterday's challenge was to mark the completion of her fundraising.