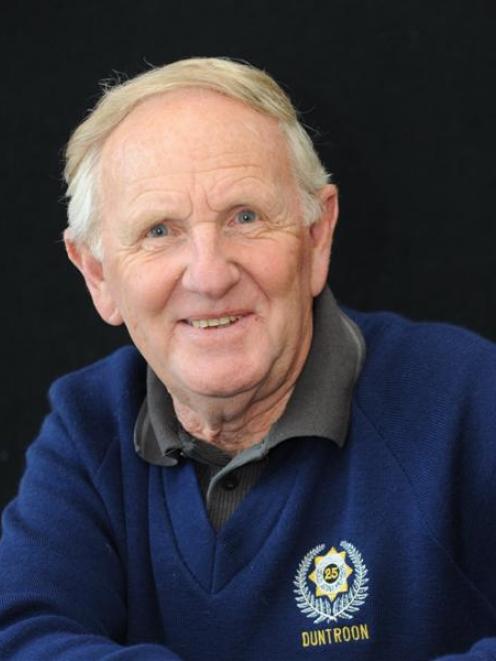 Ready for any contingency. Photo by Peter McIntosh.
Lawson Baird is the kind of guy who goes out of his way for others. Ben Guild caught up with Lawson and his wife of 44 years this month, Marion, after the pair concluded a combined 68 years' voluntary fire service in Duntroon, North Otago.


Lawson Baird began the interview for this report on the corner of Abbotsford Rd, Dunedin, dressed in Duntroon Fire Station blue.

Moments earlier, he had informed a lost ODT reporter of the distinction between Wills St, Balaclava, and Will St, Abbotsford.

He ended that same interview by jump-starting the reporter's car with a portable battery from the spacious workshop below his house.

Between times, he reflected on more than 45 years of voluntarily putting out other people's fires.

Mike Tyson was born. The Beatles landed in Tokyo for a concert tour. Leopoldville was renamed Kinshasa.

And Lawson Baird had his first day as a volunteer fireman.

A lot had changed in the service since then, he said.

"The equipment is much better. When I first started, we had two 400-gallon water tanks on the back of a transport truck. That was it.

"Then we got a little Land Rover all the way from Dannevirke, and that was our first proper little fire appliance."

"Before, we were just fire, but now we are fire rescue. Now you could be called to anything.

"If people have got a problem, they call the fire brigade ... when I first started, you just went and put a fire out - a house fire or a grass fire - but now you've got that plus accidents, spills, animals up trees or caught somewhere.

"Last year, we did a lot of medical."

The Otago Regional Rescue Helicopter had made the biggest difference, he said.

"We had one just out of Duntroon many years ago. Six young kids in an Escort hit a tree head-on. Six of them in this thing. And we could see the lights of the ambulance and we thought is it ever coming down the straight? It seemed like an hour but it probably wasn't.

"They're a real asset, those things, now. Quite often, you can get them in there beside you."

Mrs Baird agreed: "They talk about the golden hour, when they've got the best chance of survival. But it was impossible. Now, it is possible."

Mrs Baird, who attended significant blazes at the Georgetown Hotel, Pukeuri Freezing Works and Oamaru Warehouse with her husband during her 23 years of service, said not everything had changed for the better.

Mr Baird said, "As a few of us have always said, there was too much paperwork in it. After all, we're all volunteers."

"You get some of these young ones coming through wanting to join the fire brigade but when they look at the paperwork, I'm sure some back off a bit because they don't want to do it.

"As long as you're computer-literate, you're right, but I'm not, so I left it to my deputy to do all the work."

But the effects of witnessing carnage never changed.

"It's probably something you don't ever get over. I know members weeks on, months on, it affects them for a long time, especially new members coming in.

"Once you've been there, you sort of get a little bit hardened to it but it depends if you know them or if it's a local.

"It's something you don't ever get over," he said.

But Mrs Baird said those thoughts disappeared on the way to a job, along with any ideas about how inconvenient accidents and fires could be.

"You didn't used to think about that. As soon as the siren went, up the adrenaline came and you went regardless. It was your job and that was it," she said.

"With Marion and I leaving, it left them in the lurch a bit ... they're short of drivers. But they'll overcome that ... It's pretty hard to recruit out in the country. It's not everybody's cup of tea because of the training."

For the former garage and bus business owners, though, the days of racing from their property two doors down from the station to raise the alarm are over.

Mr Baird has been replaced as Chief Fire Officer by David Eckhardt, and he and Marion have returned to Dunedin, the city of their births, to the suburb which Lawson's father left with his family to work on the railway line between Oamaru and Kurow in 1956.

They take great joy from walking three of their five grandchildren to school each day, and from travelling to Heriot to see their other daughter's family.