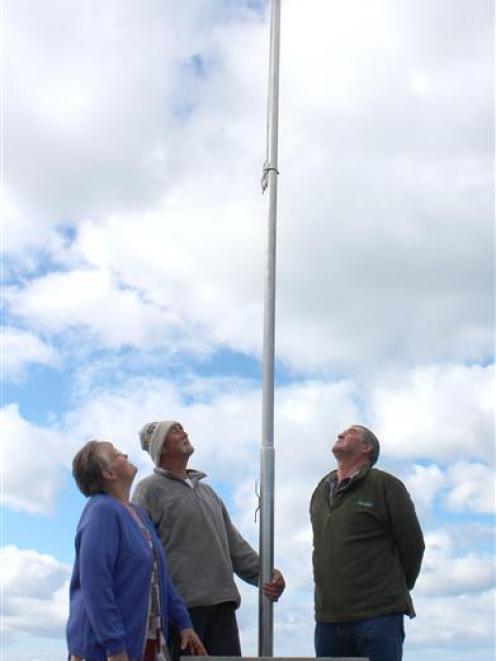 Descendants of those who fought in the world wars Lyla Jones (left, 72) and Tam Scott (68) admire the new flag pole at the Port Molyneux Bay Anzac memorial site with organiser Stephen Gold (right). Photo by Samuel White.
Kaka Point residents have been meaning to install a permanent flag pole at the local Anzac memorial site for years and finally got around to it this year.

Kaka Point residents Martin Ford and Stephen Gold both said they had discussed the idea of a new flag pole ‘‘over a few beers'', as they believed it was something the memorial site needed.

The memorial was originally at the Port Molyneux school on the opposite side of the road and was shifted to the seaside bank when the school closed.

Mr Ford said they had installed a temporary flag pole the year before and it was well received, so it was decided to install a more permanent fixture.

The pole was constructed by King Engineering and installed last week.

Mr Gold said locals were consulted and everyone appeared to like the idea.

‘‘It's just something that needed to be marked.''

Mr Gold said they planned to fly the flag the Friday before Anzac Day.

Kaka Point residents will gather at the site at noon on Anzac Day to commemorate soldiers who served overseas.

They planned to raise the flag from its half mast position to the full position at a small service, as per tradition.

Following the service at Port Molyneux they will go to the local cafe and bar.

Relatives of residents from the area fought in the world wars so it was important to mark the occasion.