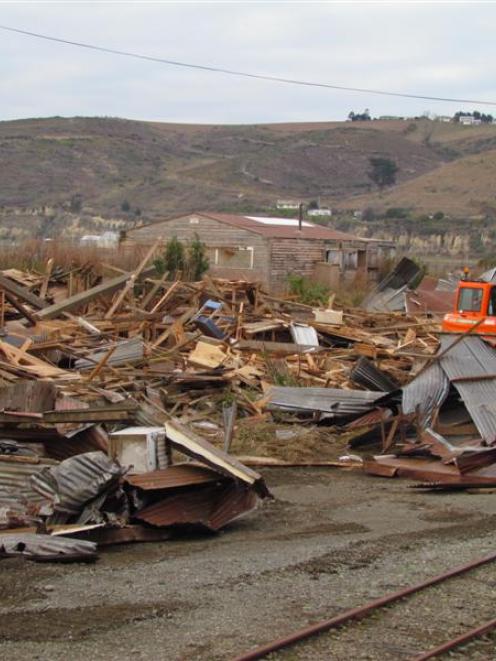 One derelict building has already been demolished and a second (background) faces a similar fate, as the Waitaki District Council cleans up the foreshore area north of Oamaru Creek. Photo by David Bruce.
Two derelict wooden buildings on the Oamaru foreshore are being demolished by the Waitaki District Council under a recommendation from a four year old plan.

Both buildings, believed to have been built in the 1960s and without historic significance, are between the historic freezer building and the Oamaru Creek.

Their demolition was recommended in a Harbourside strategy developed about four years ago to help open up the vista and improve the area, including around the freezer building, opened in February 1886 and thought to be New Zealand's oldest surviving freezing works.

Owned by the council and on council land, both buildings had been unoccupied for many years and were no longer maintained, assets group manager Neil Jorgensen said.

''They are in poor condition and will soon pose a risk to public safety, particularly if anyone ventures inside,'' he said.

At this stage, the council had no plans for the land.

During demolition, special measures have been taken to protect wildlife, in particular, any blue penguins in the area.

''We've been working with staff from the Penguin Colony to ensure they are not harmed while these buildings are demolished,'' he said.

The council was also aware many landscape artists had captured the buildings in paintings, but they had had their day and needed to be removed before they became a serious hazard.

People have been asked to keep away from the area during the demolition and clean up operation.