Full steam ahead and gaining ground 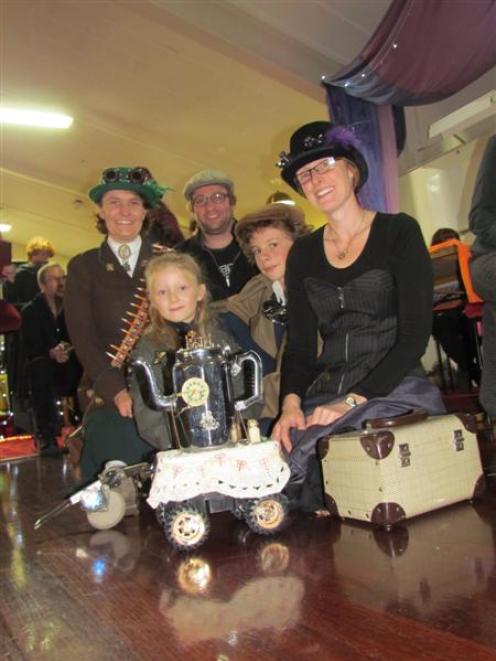 This SHINE Model E racing teapot was created for a Steampunk event on Saturday night by (from left) Susan Gee, Isla Roper-Gee (7), Paul Roper-Gee, Benjamin Baillie-Gee (11) and Bec Roper-Gee, from Christchurch. Photo by David Bruce.
From Auckland to Ashburton, Oamaru to Opunake and even Invercargill, they steamed into Oamaru for a weekend of Steampunk.

The annual festival, in its fifth year, is growing so rapidly - to 15 events over four days this year - that organisers have a tiger by the tail and will be looking for more help in the future to maintain the momentum.

For families, friends, couples and individuals from all walks of life it has become an event not to miss, but it is also attracting those out for a fun weekend.

That was what brought the Weston family from Christchurch. For husband and wife Paul and Janet, it was a chance for some family fun with two sons and a daughter-in-law.

First-timers, they heard about the Steampunk and Oamaru on Fire festival from one son who was in Oamaru last year. This year, they all decided to come.

''We are having a ball,'' Mrs Weston said as she and Paul prowled the Steampunk Souk's 25 stalls on Saturday, picking out outfits.

He was planning on ''Victorian industrialist'', she on ''something a lot more glamorous''.

Putting the steam into Steampunk were traction engine owner Owen Bennett and his driver, Friso Haantjes, who usually work out of Bluff on Southport's tugboat Hauroko.

Mr Bennett owns an Aveling and Porter traction engine built in 1892 in Rochester, England, and brought new in 1894 to Dunedin, where it was used for agricultural work.

While Mr Bennett is still working Steampunk out, Mr Haantjes is a new convert.

''It's the first time I've been to it,'' he said, dressed in a Victorian-style coat and hat with goggles.

And to see Steampunk could also be an extended family affair, you needed look no further than the Roper-Baillie-Gee combination from Christchurch.

In a new event, and one of the most hilarious, the teapots had to negotiate an obstacle course in the shortest time.

SHINE E was mounted on a radio-controlled car. Each of the family had an input into its design and construction, but it was Bec who came up with the name.

One of the Steampunk organisers, Helen Jensen, was amazed at how the event had grown from its inception in 2010, when it was a one-day affair - a fashion show with a gala dinner.

But, she admitted, it was getting to be a handful for two main organisers, albeit with a lot of volunteer help.

''If it wasn't for people popping out of the woodwork, I don't know where we would be,'' she said, pointing to volunteers who had just turned up to offer help getting things ready for yesterday's fashion show.

The number at the mess dinner with airship and teapot racing had trebled from last year, 110 being fed and entertained.

The 200 tickets to last night's dinner were sold out.

She estimated probably 80% to 90% of people at the main events were from out of town, but that had been one of the main aims - to get people to Oamaru as a boost for the town.

Dressed as their Steampunk characters, they were also a huge attraction for tourists and locals.

''With help, I think this can only get bigger,'' she said.