Half-century brought up with another cut 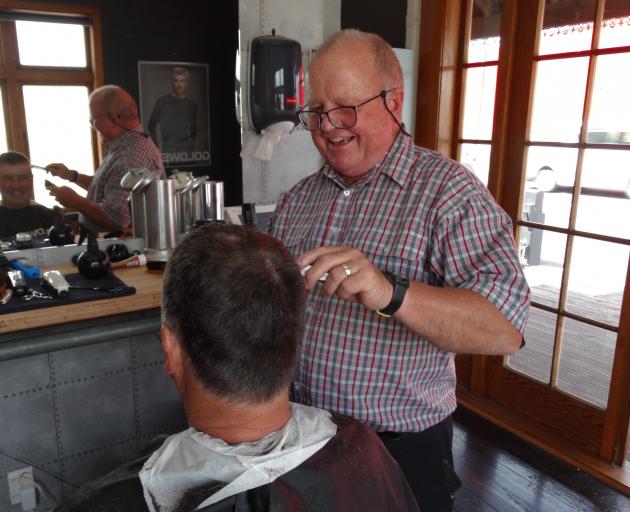 Half a century later the fear is gone, having been long since replaced by the joy he finds in the job.

Mr Brosnan, who started as an apprentice barber in 1969, bought the business of barber Jim Keen in 1974 and was based in lower Thames St until about three years ago, when he was bought out by Vivo in Eden St, where he currently works.

He marked 50 years in the industry yesterday, a career which was spurred by a family member who worked in a completely different sector.

‘‘In the holidays I used to go and work for my uncle as a builder in Christchurch. He had his own business and I always had the intention — and I didn’t know what — that I was going to have my own business.

‘‘I came home from a haircut one day ... I was 16. My mum said ‘what about being a hairdresser?’ and I thought ‘oh yeah’. She got on the phone and made a few calls and found out that Alan ‘Steenie’ Brown was looking for an apprentice.’’

He was interviewed the next day and the day after that was offered the job on one condition — that he be allowed to complete his school exams.

Mr Brosnan was not allowed to cut hair on his own for a while, but that all changed when Mr Brown was out of the shop and Mr Brosnan was being watched over by his boss’s father.

That was when Laurie Campbell wandered in.

‘‘He said ‘come and give me a haircut, boy’. I said ‘I’m not allowed to give you a haircut’. I won’t tell you the language he used, but I gave him a haircut.

‘‘It was a real entertainment ... I was scared stiff. Shaking like a leaf. But, it was a baldy — a short back and sides. He didn’t have a lot of hair. He came back to me all the time after that.’’

Mr Campbell was one of the many characters Mr Brosnan met during his long career.

He had got to know most of them personally and had shared in their happiest and most trying moments.

Hair styles may have changed over the years, but some, such as short back and sides and fades, were back in fashion.

People also got their hair cut more frequently these days.

There was only one type of cut Mr Brosnan was not keen on, the bowl cut, which he described as ‘‘really hard and time-consuming’’.

When asked if he had a few years left in the industry, he said it was not really up to him.

‘‘My wife thinks so. But I reckon I could become a lot more of a regular golfer than I am.’’