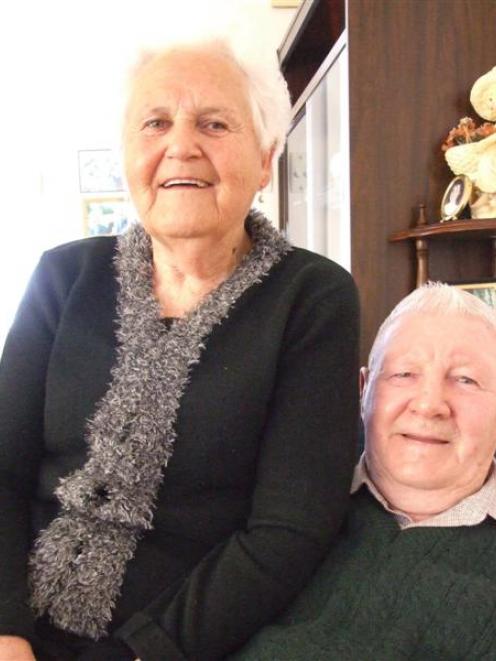 Oamaru couple Aura and George James celebrate their diamond wedding anniversary today. Photo by Sally Rae.
A young Aura James had every intention of going to England, until she went to a dance and met her future husband.

While George James said it was love at first sight for him, Mrs James (80) said she "liked his dancing".

"Only because I didn't step on her toes, I suppose," Mr James, who turns 83 this month, added.

The couple, who celebrate their 60th wedding anniversary today, were married in the Iona Presbyterian Church at Port Chalmers on April 11, 1949, and had their reception in the Pioneer Hall at Port Chalmers.

Their honeymoon had to be postponed because Mrs James succumbed to measles, along with the couple's flower girl and page boy.

Mrs James (formerly Twining) was originally from Shag Point, while her husband came from Port Chalmers and was a boiler-maker when they met. He spent 46 years working around the wharf area, including a long stint boat building.

They settled in Port Chalmers and later lived at Ravensbourne, Sawyers Bay and Wakari before moving to Oamaru in 1988 to be near family.

Mr and Mrs James have four daughters and three sons, 13 grandchildren and seven great-grandchildren. The latest additions are 3-month-old twins in Australia whom they hope to visit this year.

The couple lead busy, active lives and Mr James is a life member of the Port Chalmers rugby club (now amalgamated with Harbour), the Awamoa Bowling Club and the New Zealand Federation of Boat Builders and Bridge Builders.

They will mark their anniversary with a family celebration tonight.