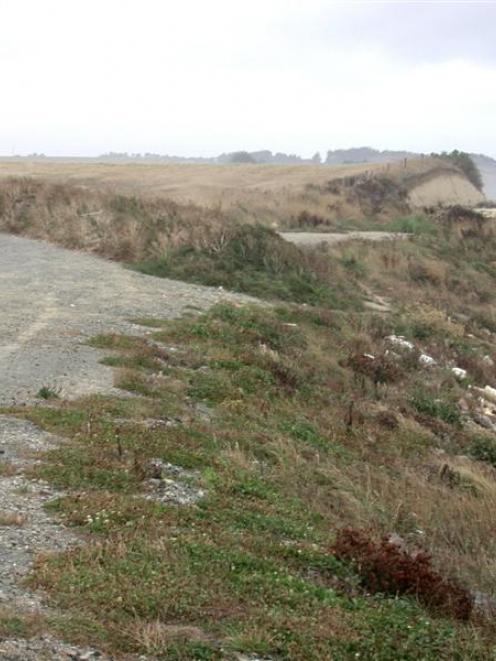 This portion of the coast road south of Oamaru along Beach Rd (to the right) has already been closed at Thousand Acre Rd (left) to Gardiners Rd by the Waitaki District Council because of coastal erosion. Photo by David Bruce.
Large sections of the popular coastal road between Oamaru and Waianakarua via Kakanui may be abandoned by the Waitaki District Council if coastal erosion gets too bad.

The alternative is that the council will have to spend up to $6.5 million over the next 25 years to keep the road open in the face of ongoing erosion.

The council has drawn up a draft coastal roads strategy following major erosion of the Oamaru-Waianakarua road over the past three years.

Already it has closed about 1.7km of Beach Rd between Gardiners and Thousand Acre Rds, replacing it with a newly-sealed route via Gardiners Rd.

But other portions of the road, popular with locals and tourists as a scenic route, are under constant threat from coastal erosion, already costing the council and its ratepayers hundreds of thousands of dollars to reinstate and protect.

The coastal road is also used as a bypass to State Highway 1 when it is blocked by flooding or other emergencies.

The ongoing erosion prompted the council in 2008 to seek a report from consultants Opus outlining a strategy for coping with future erosion.

The draft strategy is being amended based on comments from affected parties.

The amended strategy will go to the council's assets committee on March 24, before going out for public consultation before any final decisions are made.

The strategy divided the coastal road into seven sites, outlining strategies for each.

Coastal erosion in North Otago and Oamaru has been a problem for centuries, cutting away between 25cm and 60cm a year. However, during a single major storm, the sea could claim as much as 12m to 15m at some sites.

"In reality, erosion will occur rapidly in localised areas, will occur at any time, could be severe enough to close sections of the coastal road and will cost significant sums to repair."

Some of that would be subsidised by the New Zealand Transport Agency.

"The coastal route's primary function has evolved to service tourism. The extensive coastal protection works that would be required to keep it functional would downgrade the scenic value," the strategy says.

Any strategy for the road must have over-arching goals but remain flexible of how and when these can be achieved, it says.

Site 1: Beach Rd from Oamaru to Awamoa Central Rd be abandoned and Awamoa Rd and the inland section of Beach Rd be the alternative routes.

Site 2: Beach Rd between Awamoa Central and Gardiners Rds be abandoned and Thousand Acre Rd be the alternative route to Oamaru.

Site 5: Waianakarua Rd between the mouth of Orore Creek and Maclean Rd, the causeway at the Orore Creek mouth is more prone to erosion than the coast and should be monitored for erosion on a regular basis with improvements to sand dunes.

Site 6: Waianakarua Rd between MacLean and Bowally Rds be abandoned and other roads used with the feasibility of modest rock protection at the worst places along the cliff north of Bridge Point investigated. MacLean Rd be sealed as a lower priority project as funding permits.