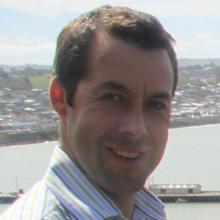 Erik van der Spek. PHOTO: HAMISH MACLEAN
Two unofficial Beach Rd landfills - which have spilled waste on to the beach below - have failed to attract Ministry for the Environment funding.

The two previously unknown landfills, side by side at the intersection of Beach and Awamoa Central Rds, about 2km south of Oamaru's Cape Wanbrow, were discovered by a member of the public nearly two years ago.

The Waitaki District Council, through the Otago Regional Council, applied for $21,351 in government funding "for further investigation of the extent of the landfill", council recreation manager Erik van der Spek said.

He confirmed the funding application was declined.

"The fund was oversubscribed and although the panel said our application had merit, funding was directed to higher-risk sites," Mr van der Spek said.

The ministry did not respond to a request for comment.

The landfills were both presumed to have been capped in the 1970s.

A preliminary site investigation conducted by regional council staff found "landfill 1" was the more contaminated of the two.

At landfill 1, arsenic, copper, zinc and lead were found.

Waitaki Mayor Gary Kircher said he had spoken with ORC chairman Stephen Woodhead about the matter and a "national solution to this problem which is occurring in numerous places around the country" was likely to be raised at an August Otago Mayoral Forum meeting.

Mr van der Spek the council had stabilised the site with rock along the bottom of the slope and continued to monitor the site in accordance with its site management plan.