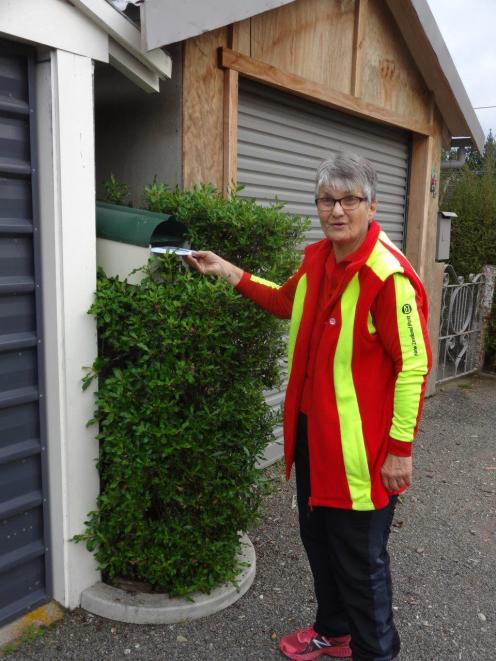 Joan Paul delivers a letter to a Palmerston letterbox on her last delivery day last Friday. Photo: Bill Campbell.
After more than 50 years helping distribute Palmerston’s post one way or another, Joan Paul has delivered her last letter.

During that time she travelled  more than 200,000km, usually on her motorcycle, around Palmerston township, and until recently, when deliveries were reduced to three days a week, worked six days a week, starting about 6am each day.

But her involvement with keeping people in touch goes much further back than that.

As a 15-year old — Mrs Paul refuses to reveal her age — she began work at the Palmerston telephone exchange.

She then moved on to become a senior clerk at the Palmerston Post Office, a very busy office handling a wide range of transactions, including for the Post Office Savings Bank.

The early starts and long days had not bothered her, she said.

She said  her late husband, John Paul, had helped out over the years.

The satisfaction of being a postie was finishing a good day’s work, she said.

She was there to serve the public, Mrs Paul said, and she had enjoyed working in the Palmerston community.

Mrs Paul was not keen to divulge her plans for retirement.She has been replaced as postie by Kathryn Gordon.