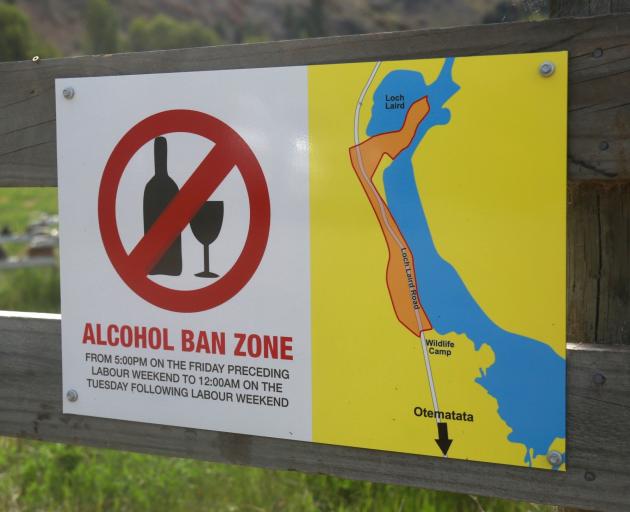 The camping area covered by the ban was empty for most of the weekend.

Traditionally, the Loch Laird camping ground, near Otematata, has been a popular area for high school pupils to gather at Labour Weekend. A temporary liquor ban was introduced by the Waitaki District Council this year in an attempt to curb alcohol-fuelled issues that have occurred in previous years, such as assaults, drink-driving, disorderly behaviour and vandalism.

There were some concerns young people would move their disruptive behaviour to areas other than Loch Laird due to the liquor ban. While there were reports of young people gathering in Otematata and at other camp grounds around the Waitaki lakes, Sergeant Blair Wilkinson, of Oamaru, said the standard of behaviour was "far higher than we’ve seen in previous years".

"I think a lot of people just elected to stay away, or they had people they could stay with in the township," Sgt Wilkinson said.

"We dealt with a couple of minor alcohol-related incidents involving young people at other camp grounds and within the [Otematata] township, but it was certainly significantly down on previous Labour Weekends.

"We’ve had no assaults reported to us. In previous years we were dealing with multiple complaints of people being assaulted within the camp ground and disorderly behaviour."

The liquor ban covered the top terrace of the Loch Laird camping ground, and extended along Loch Laird Rd to the edge of the Wildlife Reserve camp. "There were only a couple of breaches that were able to be dealt with at a low level," Sgt Wilkinson said.

Designated parking, floodlighting and extra facilities were in place at the top terrace, and there were extra police staff, security staff and community patrol in the area. The Otago Daily Times understands a small group of people set up camp on the terrace on Friday, but packed up soon after and the liquor ban area remained unoccupied for the rest of the weekend.

Sgt Wilkinson said the extra police resources were not wasted.

"We were able to concentrate on preventive activity, rather than enforcement, which is always pleasing," he said.

"There was time to get around the campgrounds and engage positively with young people.

"Having plenty of staff there who weren’t needed to be dealing with riotous behaviour — it was a win from our point of view."

Waitaki Mayor Gary Kircher said it was "not overly surprising" that young people had chosen not to camp in the liquor ban area for the long weekend, but he was pleased there had been no reports of any major issues elsewhere.

The issues in previous years needed to be addressed, and the council working group would meet this week for a debriefing and to discuss future courses of action, Mr Kircher said.

"For me it’s about our young people being able to have a good time, and to do it safely," he said.

"Certainly, from the sounds of things, it’s been done safely and I do hope they’ve had a good, enjoyable weekend."

The Dunedin impaired drivers prevention team was also in the Waitaki Valley over the weekend. There were several checkpoints, but no-one was apprehended for drink-driving, Sgt Wilkinson said.