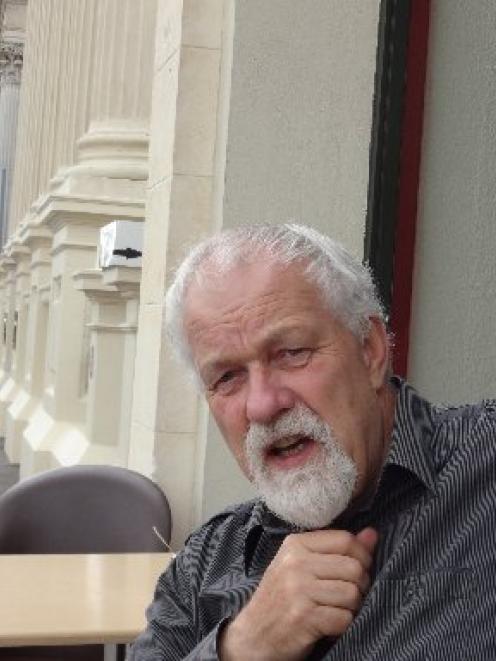 Retiring Forrester Gallery director Warwick Smith says the Oamaru gallery has always ''punched above its weight'' in terms of attracting major exhibitions. Photo by Bill Campbell.
Forrester Gallery director Warwick Smith revealed, on his retirement, his passion for valuable artworks at the gallery sometimes meant spending the night on a mattress there for added security.

The unusual measure was sometimes needed when the Oamaru gallery's security system failed.

The long-serving director retired from the gallery in October.

The third gallery director, he held the position for 27 years and helped stage more than 600 exhibitions.

Mr Smith said his best memories were of working alongside a dedicated and loyal staff, the Friends of the Forrester, a stunning and changing range of exhibitions, working with, caring for and growing a wonderful collection, working with the volunteers, and the many friendships he had developed in the museum sector over the years.

The Forrester Gallery is considered to have ''punched well above its weight'' in attracting a continuing series of major exhibitions.

Affable and friendly to all who came to the Forrester, Mr Smith worked extremely hard in what he described as the ''joy of heritage'' alongside the gallery volunteers, Friends of the Forrester and current staff Alice Lake Hammond and John Mitchell.

Over the years, his dedicated team at the Forrester has included Anna Wilde, the late Else Mackenzie, Jane McKnight, Belinda Jones, Sheridan Dickison and Noelline Edwards.

On his last day at the gallery, he worked to the very last, packing out a large touring exhibition. With its major exhibitions, the gallery has become part of the global village.

He has enjoyed exhibiting the works of art-school contemporaries Gaven Bishop and Ross Gray, architectural drawings, an important gift to the gallery of works by Colin McCahon, and the works of Colin Wheeler, who was Mr Smith's old art teacher, from the Forrester collection.

Other exhibitions at the gallery that stood out for him were the first in a public gallery for many years of paintings by Grahame Sydney, works by good friends Burns Pollock and Sister Mary Horn, ''An Antarctic Summer'', the record-breaking Steampunk exhibitions, ''Waitaha Treasures'', ''The Drought'' and ''Artist's Against Aqua''.

The historic Forrester Gallery itself, a former bank building, was a major focus as an exhibit, Mr Smith said.

The annual Burns Memorial, a local institution for 40-plus years, drew many young school artists, and schools in and outside Oamaru as far south as East Otago High School and Palmerston Primary School exhibited their work.

His wife, Libby, had been a wonderful support. Mr Smith said she described herself as a ''Forrester widow''. Mr Smith's wishes for the future development of the Forrester include a lift.

He would also like to see dedicated spaces for temporary and collection exhibitions and working space for young artists.

The true role of the Forrester Gallery, in his view, is as a forum for relevant debate and discussion.

''The Drought'' exhibition came at the same time as a prolonged dry spell in North Otago. Retirement for Mr Smith and his wife will be living for most of the year at their home in Naseby.

Selling their home of 40 years in Oamaru would be a wrench, he said.

They would retain a small town house in Oamaru for visits during the winter when Naseby might become too cold. Mr Smith plans, after more than 40 years, to make some art of his own.

He is also interested in continuing his long association with St George's Anglican Church in Naseby and perhaps undertaking some voluntary work with the Maniototo Museum.