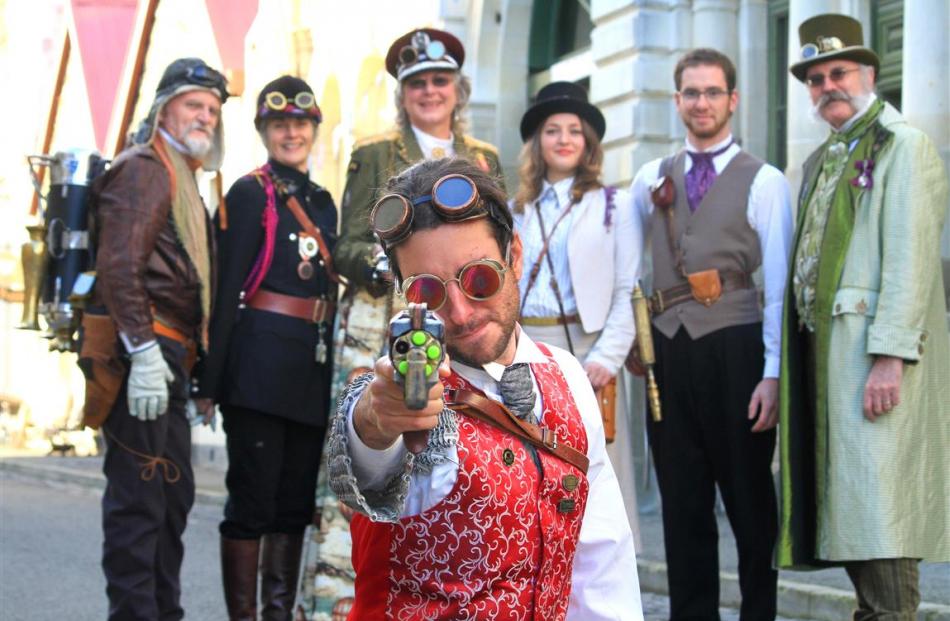 Gearing up for Oamaru's four-day celebration of Steampunk are (front) Florent Cone, of France, and (back, from left) Iain Clark, aka Agent Darling, of Oamaru, Helen Jansen, aka Lady Helen Steampunk, aka La Falconesse, of Oamaru, Jane Craven, aka Mrs...

For fans of Victorian-era science-fiction reimagined there is no place to be but New Zealand's Steampunk heartland this weekend.

Oamaru's Steampunk NZ Festival Weekend, which begins tonight, had become "a place of pilgrimage'' for Steampunks as it continued to develop, festival co-organiser Helen Jansen said.

"Oamaru is the original Steampunk community ... the centre of Steampunk in this country,'' Ms Jansen said.

The festival began as a fashion show and gala ball and transformed into a four-day event. French, American and Australian Steampunks would join Steampunks from across New Zealand for the June 2-6 celebration.

A Guinness World Records attempt would be held at the Oamaru Club after the Inaugural Splendid Teapot Racing World Champs.

To break the record for the most people dressed in Steampunk outfits in one place, the Oamaru attempt needed to gather more than 184 people in costume.

A world record would be another feather in Oamaru's Steampunk cap, she said.

The founding event, the Public Fashion Show, had more than 25 entries in four categories this year - newcomers, veterans of the show, hats, and prosthetics - the latter category inspired by a breast cancer survivor with her own "very obvious'', but "very tasteful'' Steampunk prosthetic breast.